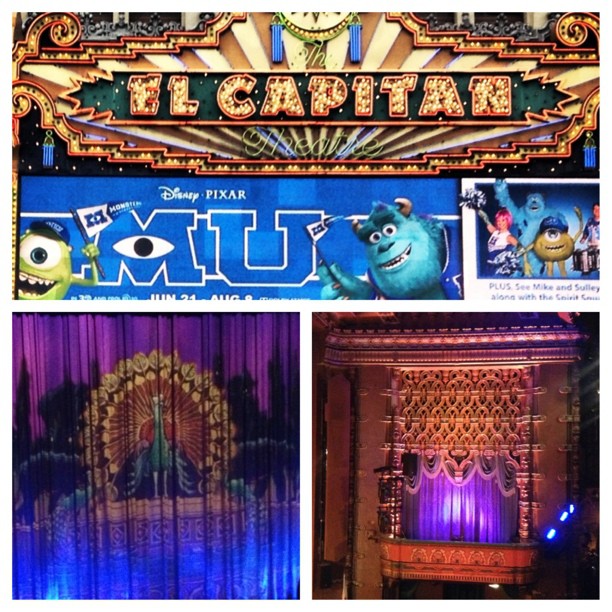 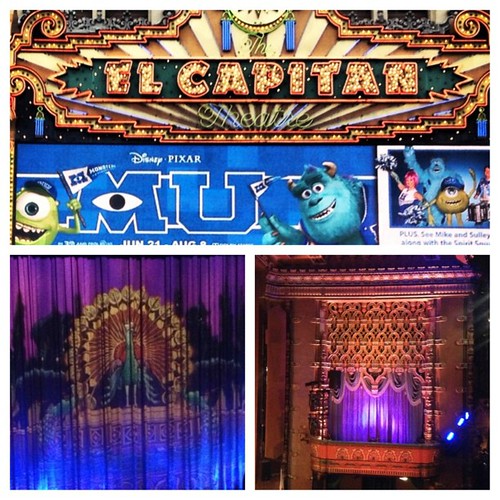 A visit to the El Capitan is on our LA Kids Bucket list and seeing a movie in the theater for the first time is on our summer to do list. Today we were able to cross off both.

All I have to say is wow, what an experience to see a film at the El Capitan. And what a lucky child I have, getting to see his very first cinema movie there. I’m not sure that he will ever be satisfied seeing a film in a regular cinema after today.

The El Capitan is a historic theater in the middle of Hollywood and only 3 metro stops away from our house. The interior has been beautifully restored in exquisite old-fashioned East Indian theater style. It was a live performance theater for many years in the 1920s and 1930s. Disney purchased it in the late 1980’s and since then, it has mostly showcased Disney films.

There are general admission and VIP tickets available for all shows. Although the reserved VIP seats come with popcorn & a small drink  and no long lines to wait in, we decided to go for general admission tickets.  We showed up 30 minutes early and after only a short wait outside, were able to snag the best seats in the theater (we like to sit in the first row of the balcony).

We also splurged for the kid’s deal (hard plastic cup, theme toy, popcorn, tiny candy & beverage).  This isn’t cheap, but is still less than the extra cost of the VIP ticket that only gets popcorn and a drink with no toys or cups to keep. VIP tickets are probably great for showings apart from this one, but since it is early and specifically stated for small children, the crowds seemed to stay away. 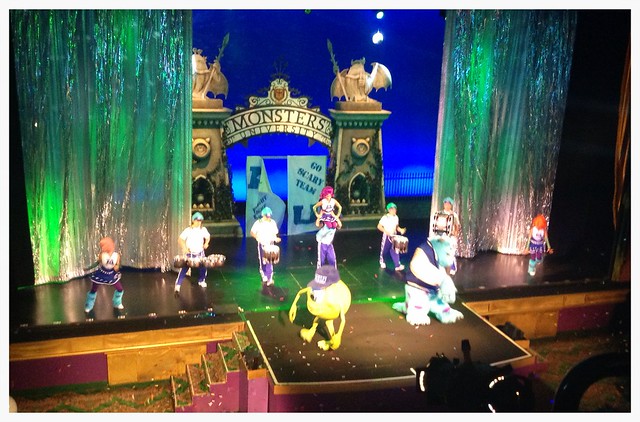 The El Capitan experience begins with a live music performance by a renowned organist playing Disney favorites. Watching the organ drop down into the stage was magic in my toddler’s eyes. He was mesmerized already.

Following this, we were entertained by a 20 minute live stage performance from the Monsters University Pep Squad complete with a guest appearance by Mike and Sully.  My son would have been satisfied to leave with only this show, but there was more to come.

We were then instructed to put on our 3D glasses while the lights were dimmed. The movie was about to start. Or so we thought. A short film about two umbrellas was shown – further mesmerizing the children in the audience and getting everyone accustomed to their 3D glasses. And finally our movie began with cheers from the kids below.

The entire experience was 3 hours long. I was worried at the beginning that all of the extras would wear my son out before the film finished, but he was glued to his seat (err.. my lap!) for the entire time. His first cinema experience was a total success!

The El Capitan provides screenings designed for the littlest fans on Tiny Tots Tuesday, which are typically held ever other week. These 10 am movies have dimmed lights and reduced sound levels. Although, even with reduced sound levels, my toddler still felt the need to wear his noise reducing headphones for much of the show.

I would whole heartily recommend this for your child’s first movie experience. The Tiny Tot screenings are much less crowded and no one will be offended or disturbed if you need to walk out or if your child starts crying.  Remember to bring a light blanket or dress your child warmly as it gets quite cold inside.  Also, if you do drive, parking is partially validated  (4 hrs for $2) if you park at the Hollywood/Highland lot across the street. Better yet, take the metro which stops on the same block.