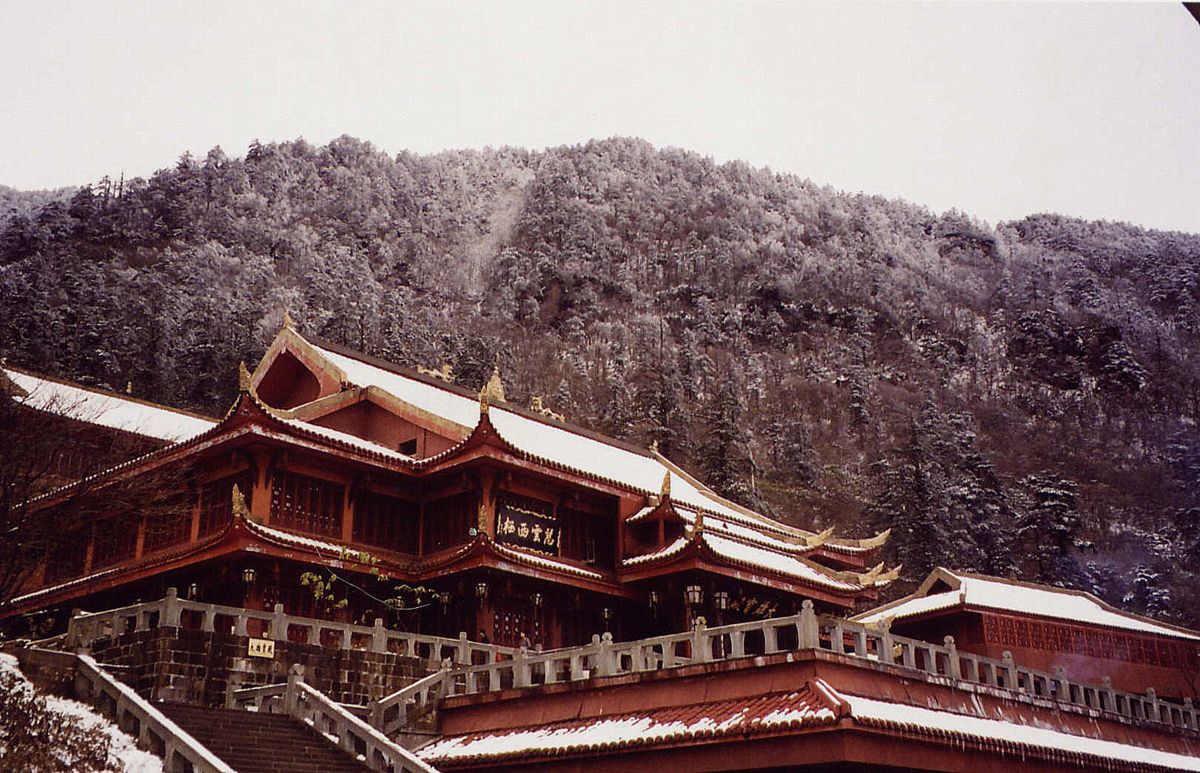 My trek to one of China’s holiest Buddhist monasteries on Emeishan (Mount Emei) was, if I remember correctly, a 6 or 8 hour hike up a mountain. This hike was not on a dirt path, rather it was up stairs, the entire way! Regardless, this excursion was very special and memorable to me for a couple reasons. This was my first encounter with monkeys in the wild. It would not be my last, but being my first meant that I was pumped full of adrenaline, excitement and terror! Second, this is where my love and obsession with Buddhist monks first began.

At the start of the Emeishan trek, there are hoards of tourists, back then (2001) mostly Chinese and Japanese tourists, hoping to make it to the top of the mountain. Many were being carried up the mountain by porters on king chairs. The rest, huffed and puffed up the mountainside like us. With so many people starting their trek at the base of the mountain, the monkeys quickly learned that people carried supplies with them for the hike. We had been warned prior to starting to put all of our belongings inside of our backpacks and to tuck in all strings and zippers. If the monkeys saw anything dangling, they would attempt to take it from you. Terrifying right?

And our guide was correct. Apparently the Chinese and Japanese tourists were not warned of this. They started their journey with noisy plastic grocery bags full of soda and snacks. And guess what? The monkeys took it from them right away. It was a sight to see. Scary. Sad. But mesmerizing. Watching a wild animal take a bottle of Pepsi, twist off the top and chug it in a few seconds was insane to me. Sadly it only showed how adept they had become to stealing and opening human food.  When they were finished they would just toss it to the side, leaving the mountainside full of garbage.

This continued at several points during the hike. A gang of monkeys would appear out of nowhere tugging at people’s clothes and putting their hands in pockets. Our guide would give a signal of warning and we would begin hiking with our hands up above our heads. We felt like prisoners walking through their jungle. It was hilarious and nerve wracking at the same time.

The second reason this trip is so memorable for me is because of an amazing monk I met while staying at the monastery at the top of Emeishan. He was one of the few who spoke any English. He wasn’t fluent, but he was excited to practice. We spent hours talking about his life, how he became a monk and what it meant to him to be a monk. He had an angelic quality about him that I had never seen in a person before. It was such an enlightening and spiritual visit at the monastery that I have never forgotten it or my monk friend.