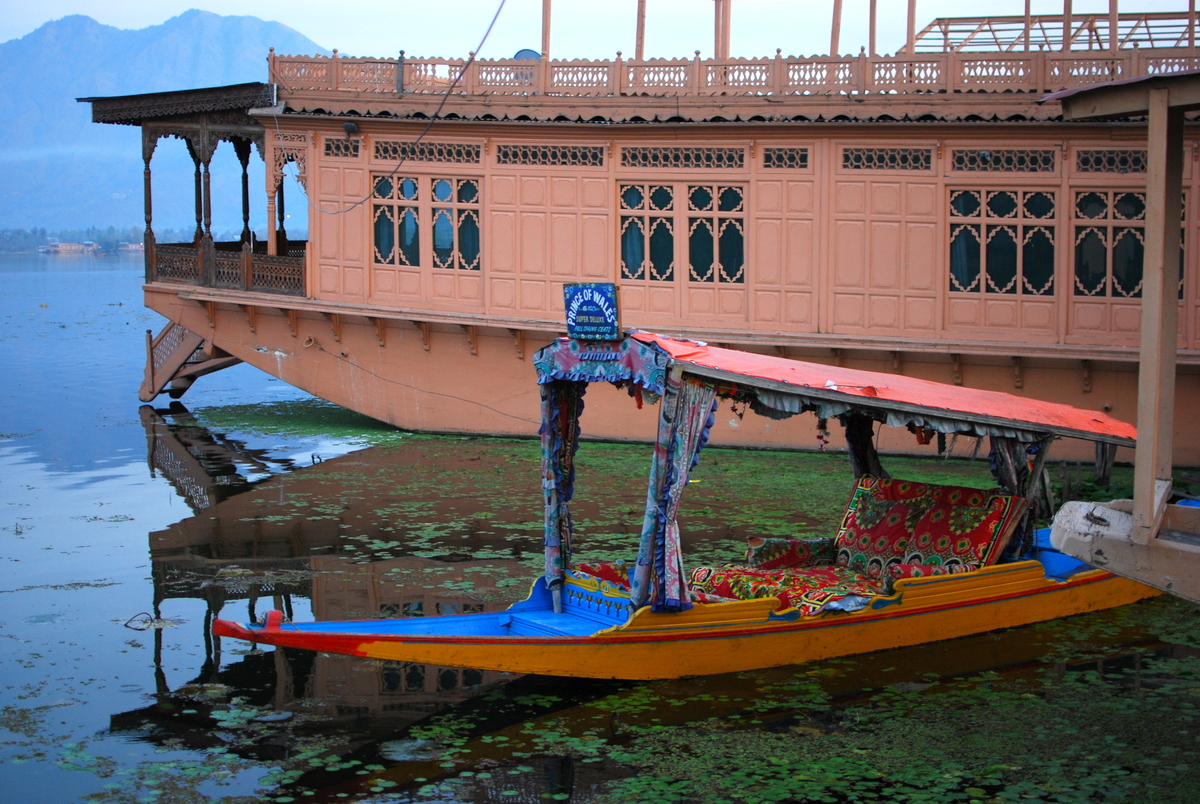 The state of (Jammu &) Kashmir actually includes the areas of Jammu, Kashmir Valley and Ladakh. I have been lucky enough to visit two out of the three regions in this northern most state of India bordering both China and Pakistan.

My first visit to this state was to Ladakh. I came for the the other worldly scenery and of course the Buddhist monks. The road to Ladakh is only open for about 4 months of the year, which luckily coincides with the summer and monsoon months in Mumbai where you are either drenched in rain or sweat!

It is a long journey from the south of India, but the main part really only begins from the hippy town of Manali. The only way to get to Leh, the main town of Ladakh, by road is on the two lane 500 km Manali-Leh Highway. Most tourists take 2 days to cover the route, staying in yurts on the side of the road along the way. I was limited on time and and wanted to get there quickly, so did it in one go – 16 hours in a bumpy, jam packed off-road vehicle slowly winding it’s way on dangerously curvy stretched of road.

I had always wanted to do this trip again with more time as it was some of the most breathtaking scenery I had ever seen. At certain points I could have sworn I was on the moon. And then we would pass ice cold grey rivers running down snow capped mountains. The road to Leh goes as high as 17,000+ feet at the Tanglang le Pass. Coming from Mumbai where it was muggy and warm we were surprised to see snow still on the ground and find that we needed to wear ALL of our clothes in our backpacks for this stretch of road.

Pulling into dusty Leh with it’s monasteries perched precariously on the cliff sides was mesmerizing. Walking around the town seeing little boys with their shaven heads and maroon robes filled me with such happiness and peace. I have previously mentioned my love of monks (A is for Angkor Wat and E is for Emeishan), add to that adorable children training to be monks and I’m in love.

I spent a week exploring the areas surrounding Leh, visiting monasteries, chatting with monks, observing gorgeous Buddhist ceremonies, witnessing one of Leh’s many summer festivals and being one with nature. I have travelled to many places in India and throughout the world, but few places have recharged me as much as my week in Ladakh.

If you happen to be in India during the summer, this is one state that is absolutely worth the trek to see. It is so unlike the rest of India that you will wake up wondering if you accidentally crossed the border into China or Tibet!

The other area of Kashmir to visit is the part that is often said to be off limits to tourists. It’s the part closer to Pakistan and is the Muslim majority area of Kashmir. This is the closest I have been to a war zone. India, nor Pakistan would officially call it a war zone, but there are constant outbreaks of gun fire, terrorist attacks and general security issues.

Even with the warnings, I had images in my head of this beautiful mountainous area from hearing about my grandmother’s visit in 1988, that I knew I couldn’t leave India after so many years without experiencing it myself. There was a time of relative calm, so we decided to head up for a long weekend in October.

Arriving to Srinagar is a bit intense. As you arrive you are greeted not with the beauty you are expecting, rather constant checkpoints, roads cut off by security lines and men roaming the streets with guns. It’s hard to remember as you drive through that this is a place known as “Heaven on Earth”.

As you weave your way through the ugly reality of Kashmir, you make your way to where most tourists stay – Dal Lake. In our case, it was actually the smaller, less touristed and more picturesque Nagin Lake. It is here that you then board a small shika (paddled boat) to go across the lake to your moored houseboat accommodations.

Our houseboat felt like we had stepped back in time. It was decorated with very detailed woodwork – chairs, tables, cabinets, etc. It was beautiful in its old school feel. One of the great things to do do on your houseboat is to relax on the deck, watching the world go by. Although, much of the world comes right to your boat step in their shika boats, trying to sell you anything from a diet coke to flowers to fresh fish! It can be annoying, but for the most part we found they just wanted to chat. You really got the feeling that not a lot of foreign tourists made there way here anymore.

Sadly, this the years of unrest in this area has severely impacted what was once a thriving tourist industry.  Indians still frequent this beautiful state, but we didn’t see another foreign tourist during our visit.

It is a mountainous region of great beauty, offering much in the way of outdoor activities. Skiing in the winter, horse riding, hiking and bird watching in the summer.  I wish we had been able to return to experience it all. During our stay we took a trip out into the mountain town of Gulmarg to ride horses in the mountains and experience a more secluded part of this beautiful valley. It was absolutely breathtaking. My poor horse stood still more than he moved due to my constant need to take photo breaks!

On our journey back from Gulmarg, we stopped at a small restaurant to have chai and a snack. It was filed with what we assume were military. It’s hard to tell in India since often times they do not wear uniforms and they only way you know is by the guns they are carrying!  Scary I know.  At this restaurant we started chatting with a few of the soldiers, as seemed to happen everywhere we went.  I had gone to the bathroom, only to return to see my partner with a AK strapped on! What!? They wanted us to have our photos taken with them and their guns.  You can’t really say no to people with guns, so we now have photos of my husband holding guns, looking terrifying! (I would love to show you, but he refuses to let me share it!)

Even with the security issues, this state is just such a beautiful and amazing place! I can see why both Pakistan and India want to keep it as their own. The mountains. The lake. The people. Just mesmerizing.