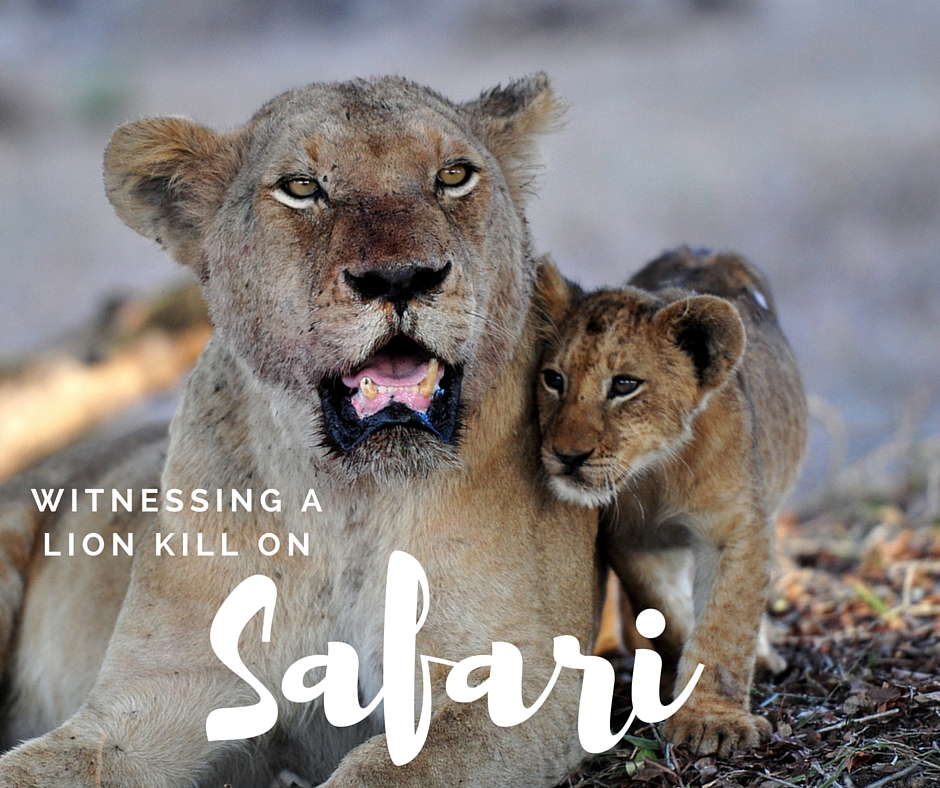 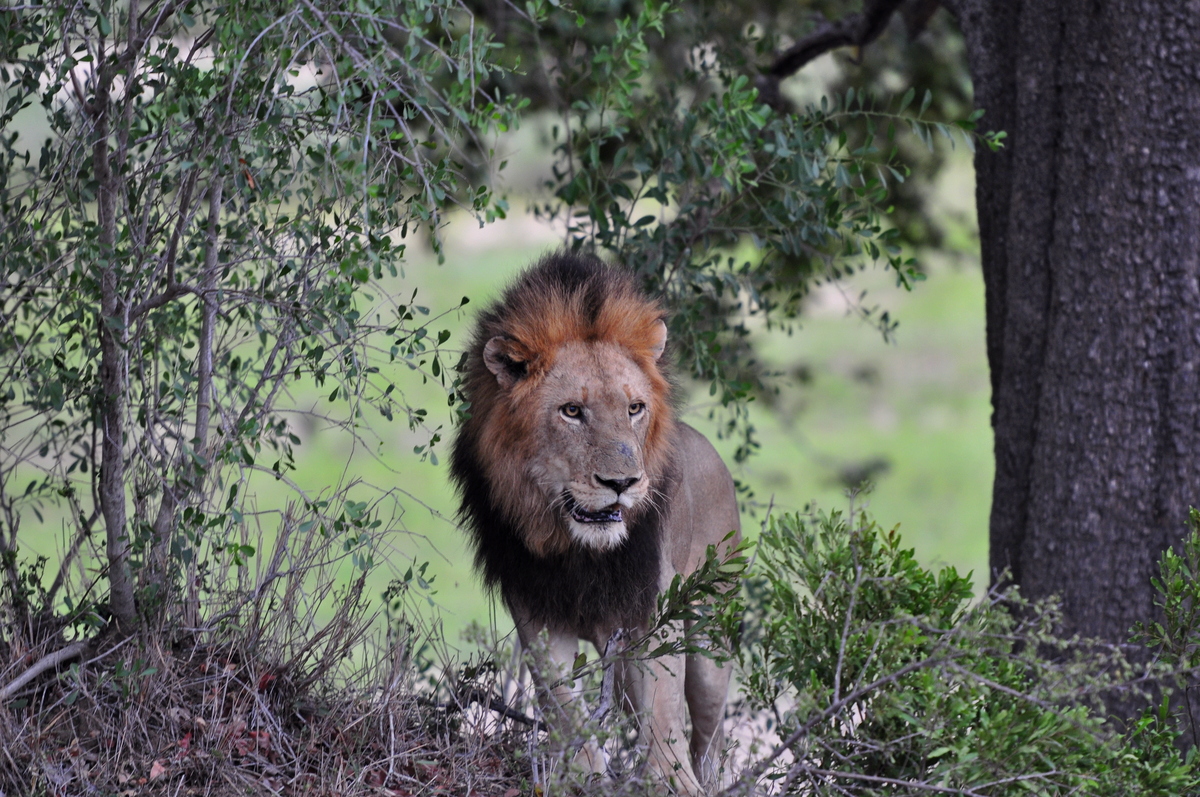 There are many reasons people go on safari in Africa; but, it’s safe to say, the main reason is to see animals in their natural habitat, untamed and free to be wild. Not every person comes to see the same thing, either. Some come for the close-up photo opportunities, some for the less well known mammals or birds, while some go on safari for the exhilaration of seeing a kill.

Prior to our trip to South Africa, we spent weeks checking out the Mala Mala Instagram feed surveying the animals we would soon see in person. It is there that we first saw a video of lions attacking a buffalo. It was horrifying, mesmerizing and addicting. I was too squeamish to watch with the volume on, however, my 5 year old was hooked. Seeing the circle of life in action quickly became the *must see* on his South African adventure wish list. Mine was a bit simpler.. only to see a herd of zebra grazing peacefully on the open savannah. But would either of us get our wish, we weren’t sure when we set off on our adventure across the world. 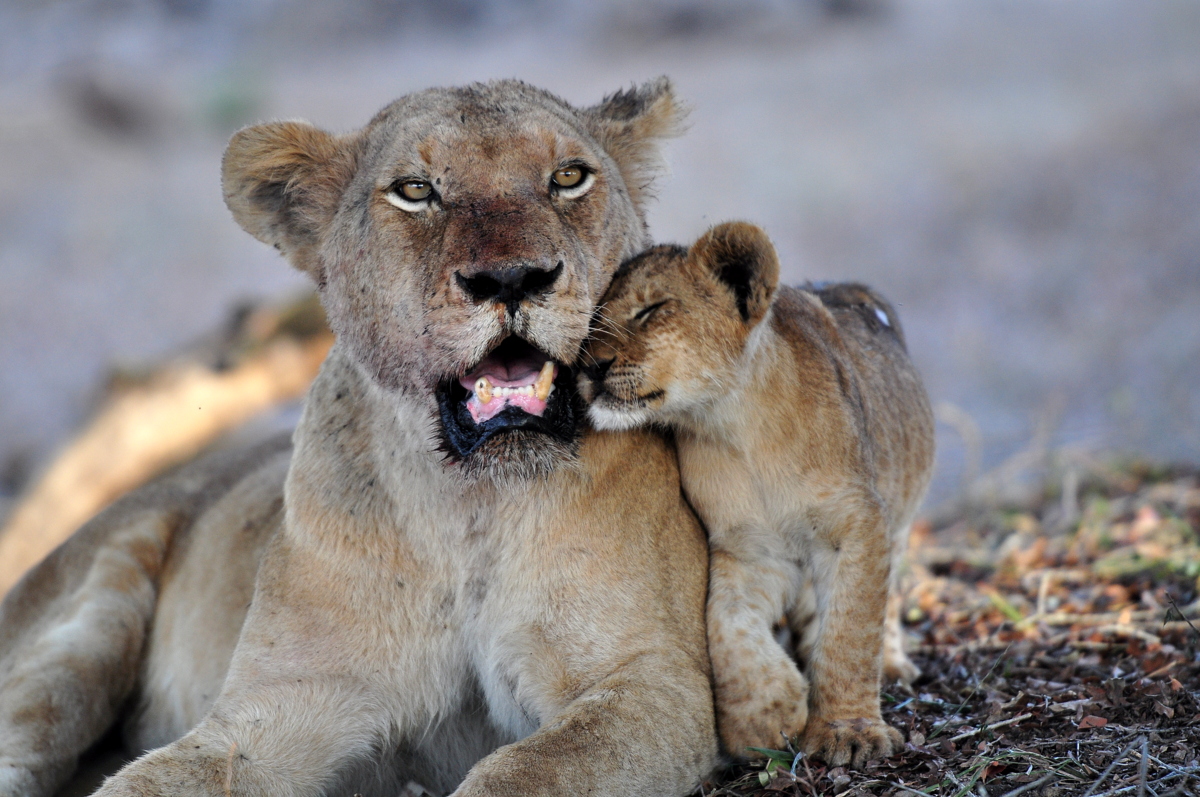 We had only been out on our first game drive for an hour, following several leopards through the bush when we got the call that a lioness was stalking a herd of buffalo at a watering hole. Would this be it? My son’s wish granted on the first game drive of our trip? It felt too good to be true.

Our guide told us to hang on tight and off he went, flying over the reserve’s dirt roads like we were on a theme park roller coaster. My son was loving it. It was just the adrenaline fueled afternoon we all needed after 30 straight hours of flying from Los Angeles to reach this magical land.

Up and down and around sharp corners at full sped, we made it to the hunting ground long before our lioness had moved into action. Whew. We had all been worried we were going to miss our opportunity. Apparently witnessing a kill doesn’t come as often as one might think from viewing the Mala Mala Instagram feed!

As we settle in near the watering hole, the hunt begins. The lioness has left her pride, including 4 cubs down the riverbed at the site of their last buffalo kill. It’s not hunger that fuels her, our guide tells us, as the pride has been feasting on another buffalo for the last several days. Rather, it’s just because she can. There is a bad drought here so there are limited water options; the lions and buffalo both know this. 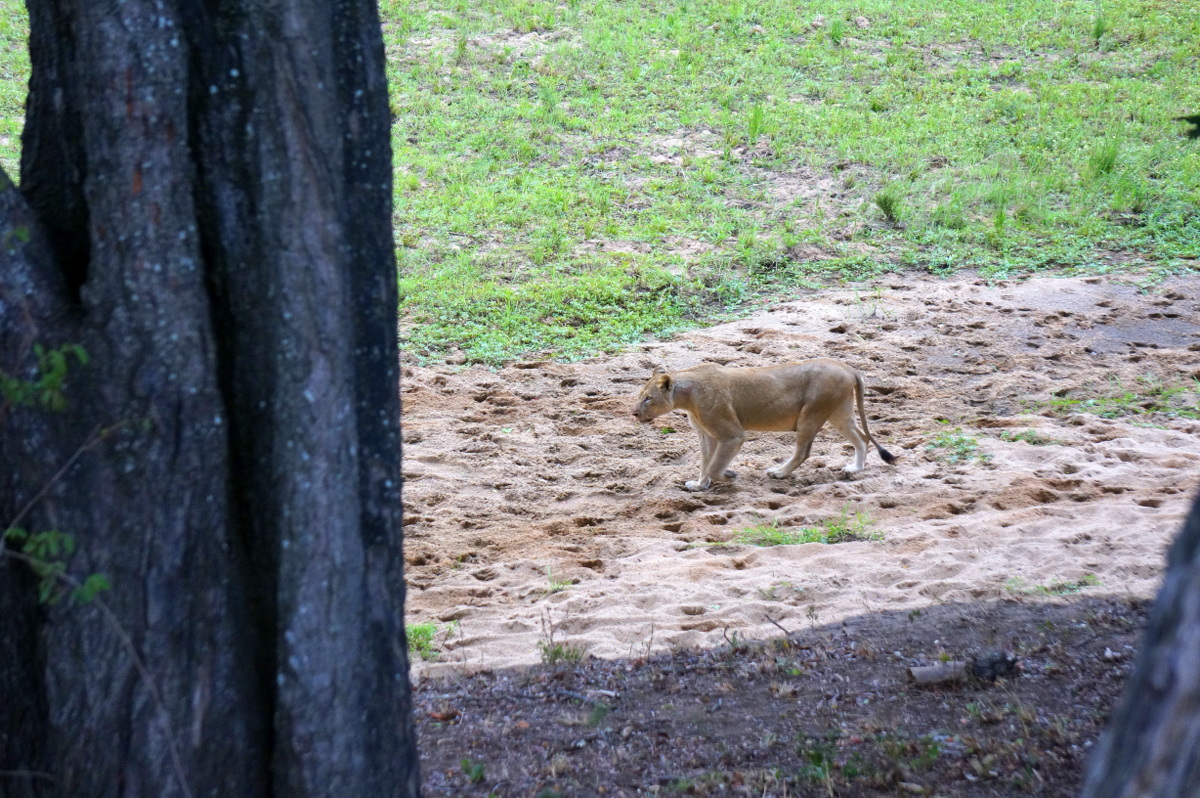 We watch as the lioness from the Eyrefield pride slowly creeps her way through the dry riverbed towards the waterhole where the buffalo are cautiously drinking. The herd begins to casually move away from the water, still not aware of what is lurking in the short grass behind them. 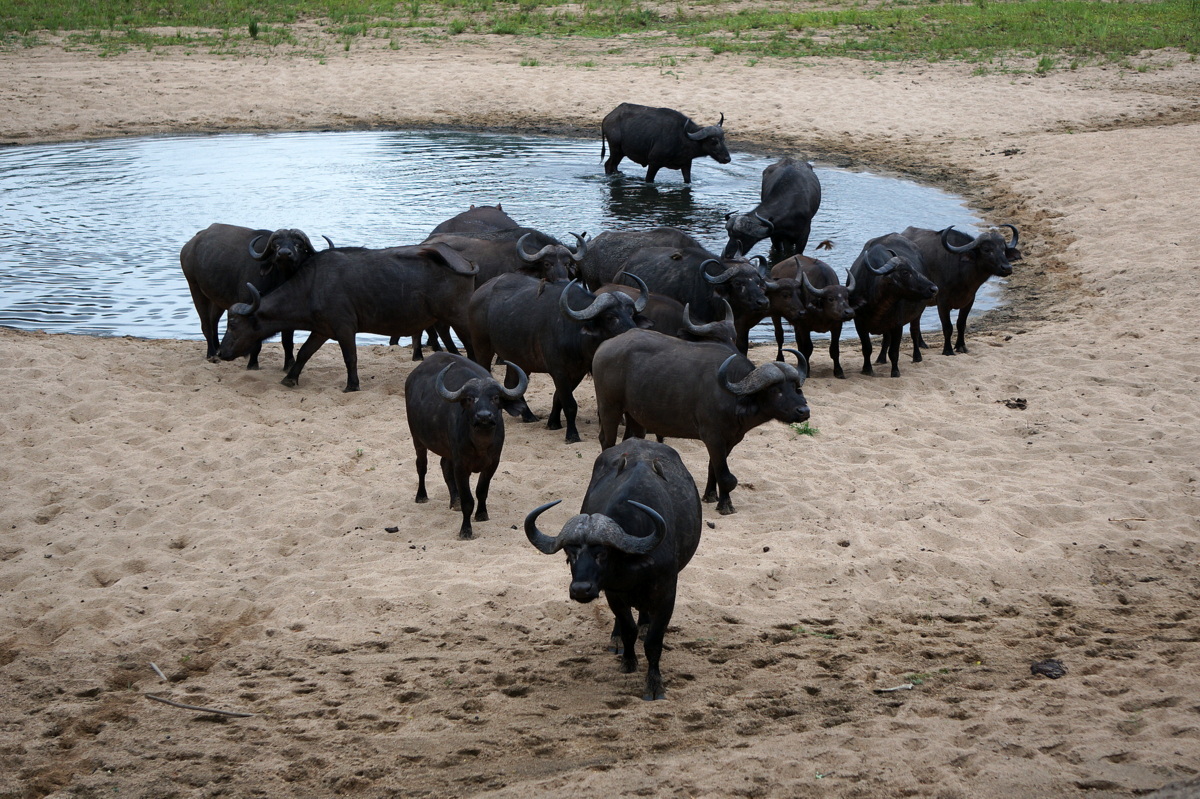 Within seconds she springs into action, dust hurling through the air as the herd of buffalo scatter. As the dust clears, we see that all but one buffalo have run to safety. 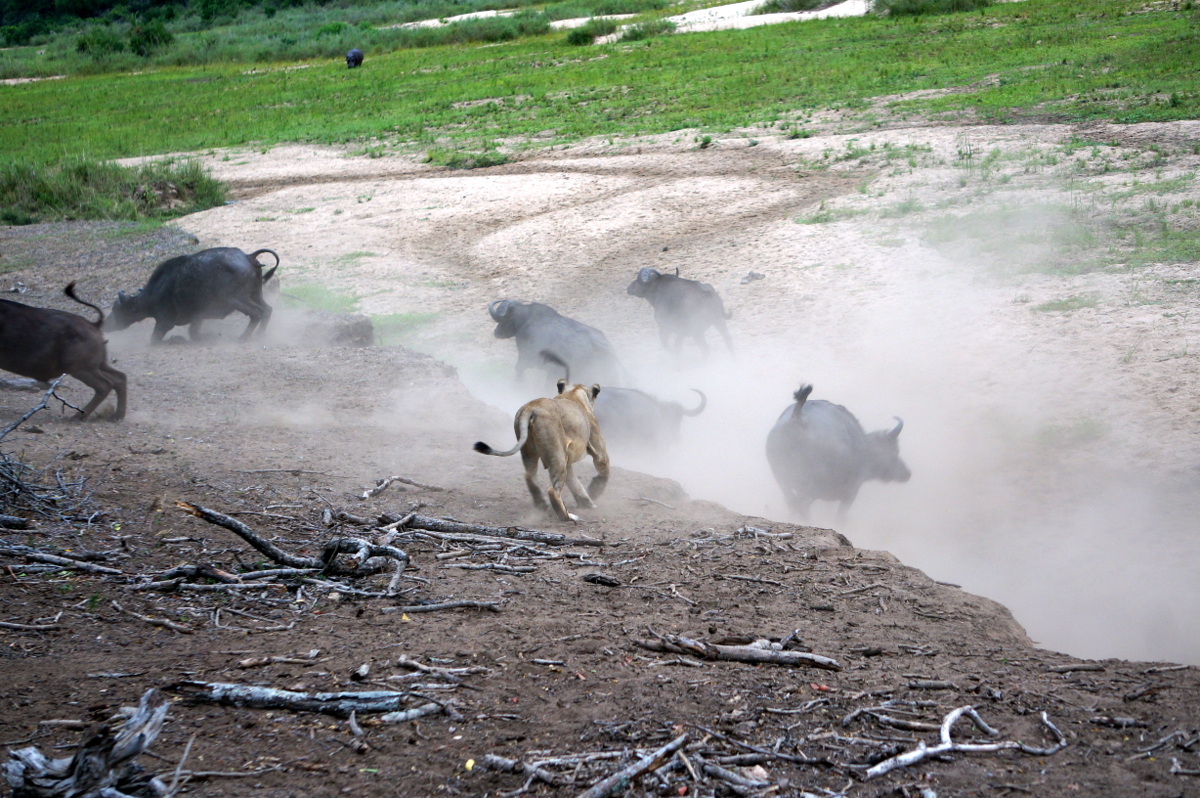 What keeps this pregnant buffalo here we aren’t sure, ego perhaps, exhaustion or the inability to run with her baby weight? 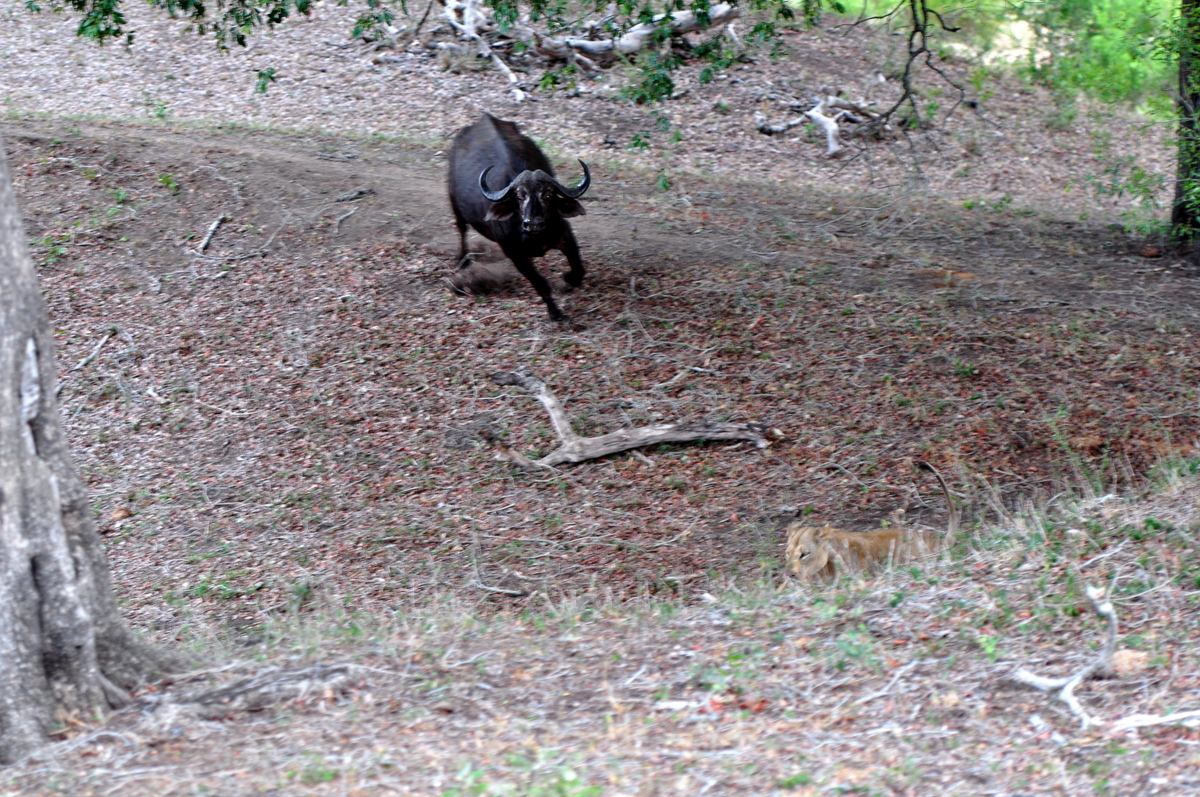 A game of cat and mouse proceeds as the lioness and buffalo stand off against each other. The lioness backing down against the buffalo’s movements, hiding behind a tree. We realize she is biding her time with the buffalo, waiting for her pride to join her. 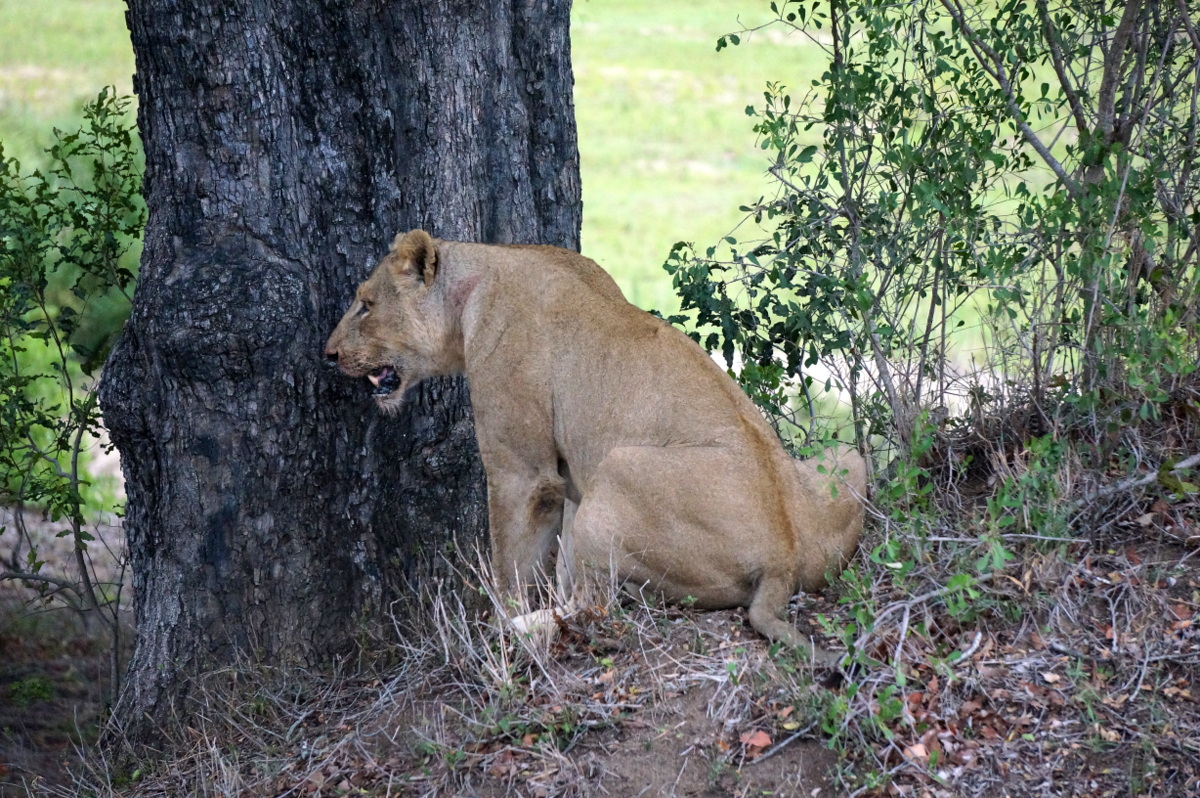 Round and round the tree they go, when all of the sudden a male appears ready to assist. 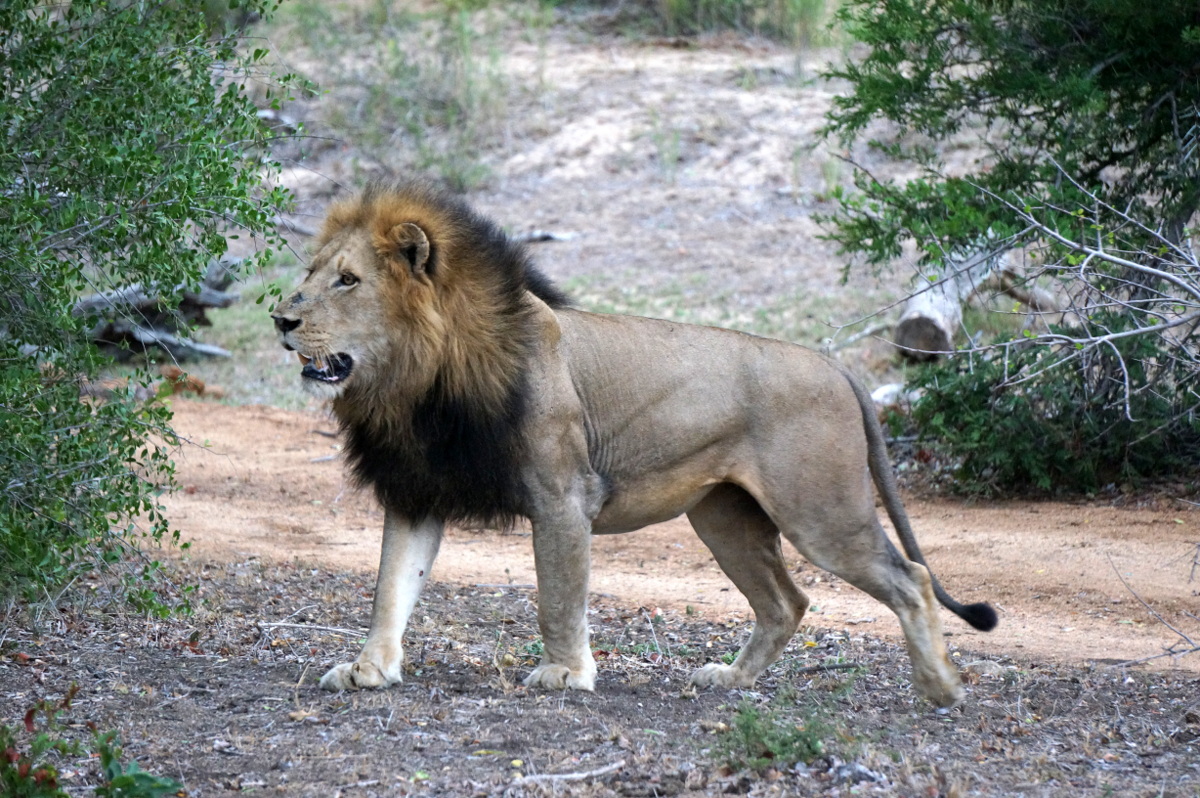 I’m not sure how the other lions know when to appear, but they seem to have worked this out through past experiences as it looks like clockwork to us. 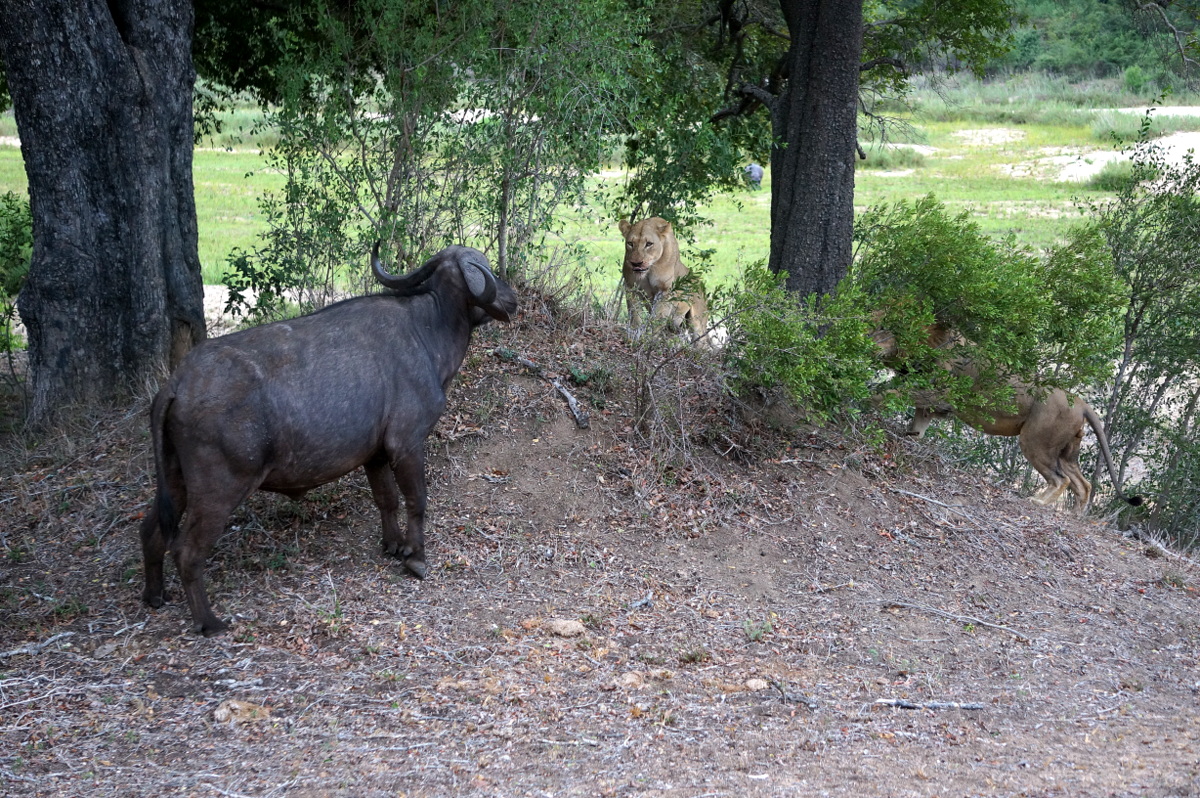 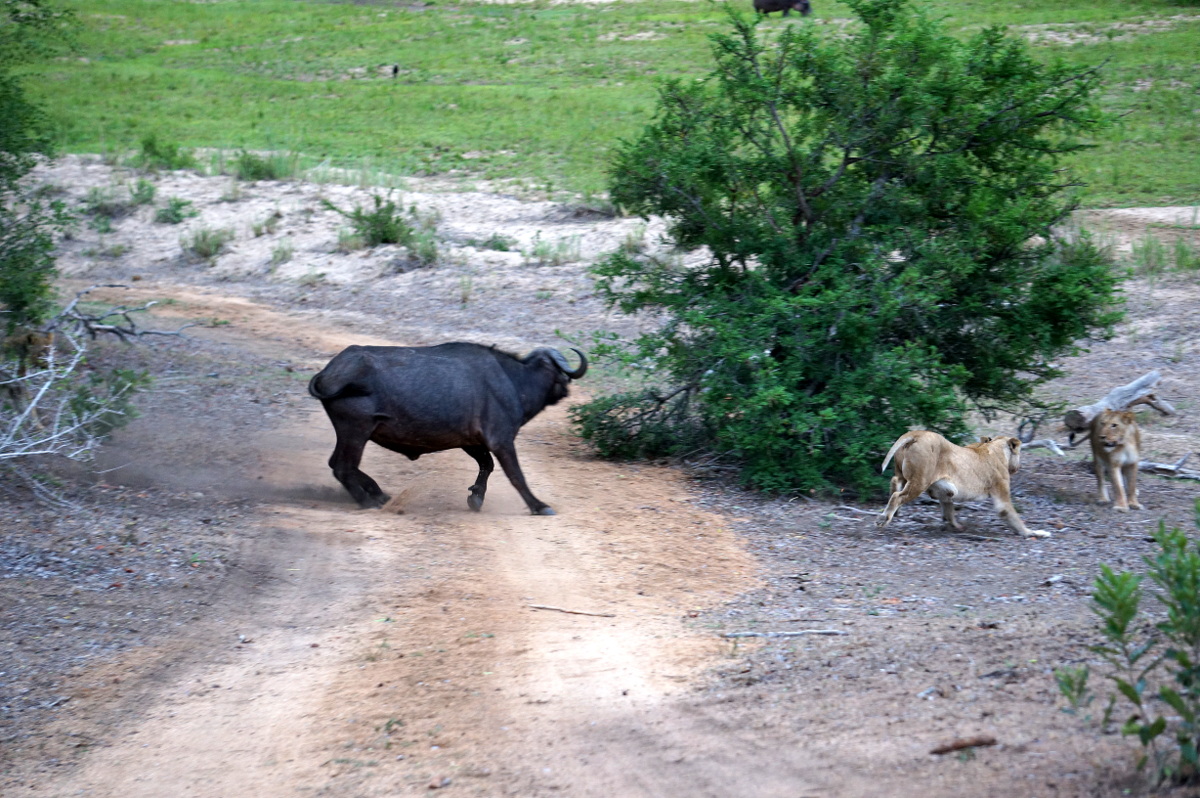 Within a flash, there are more lions and the buffalo is down. She didn’t give much of a fight says our guide. Due to the drought many of the buffalo are weaker than normal and just don’t have the energy to fight once they are surrounded. 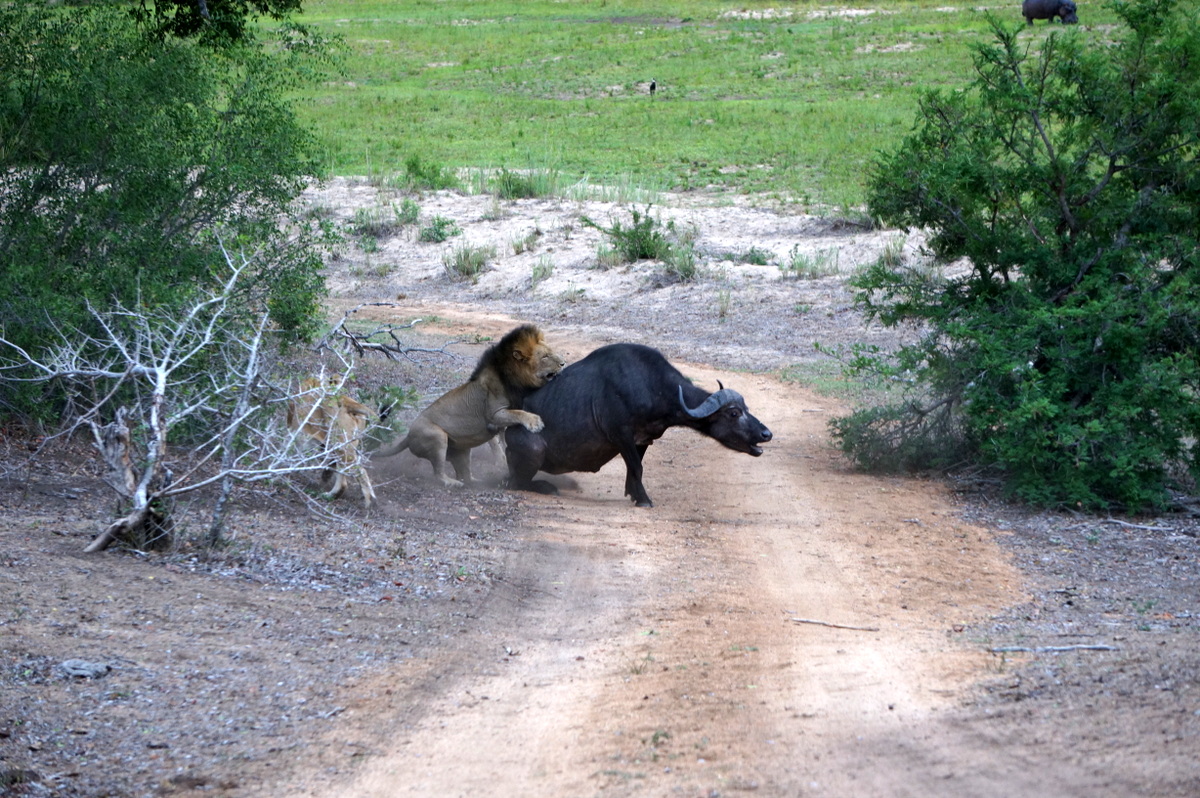 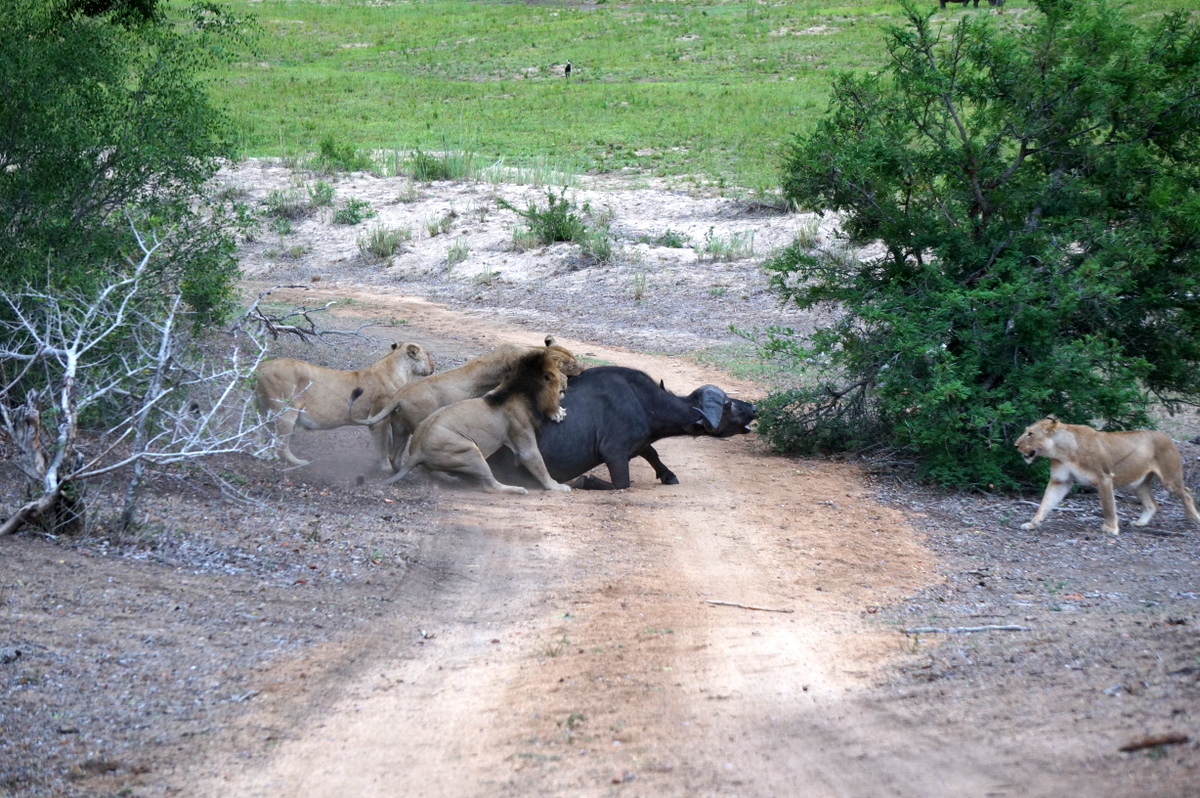 Contrary to what I had imagined, the scene isn’t bloody or gruesome, it’s actually quite humane. The orchestrator lioness holds the buffalo’s throat while the other lions continue to hold the buffalo down when she gives a few little movements of protest. Within minutes the buffalo is dead. 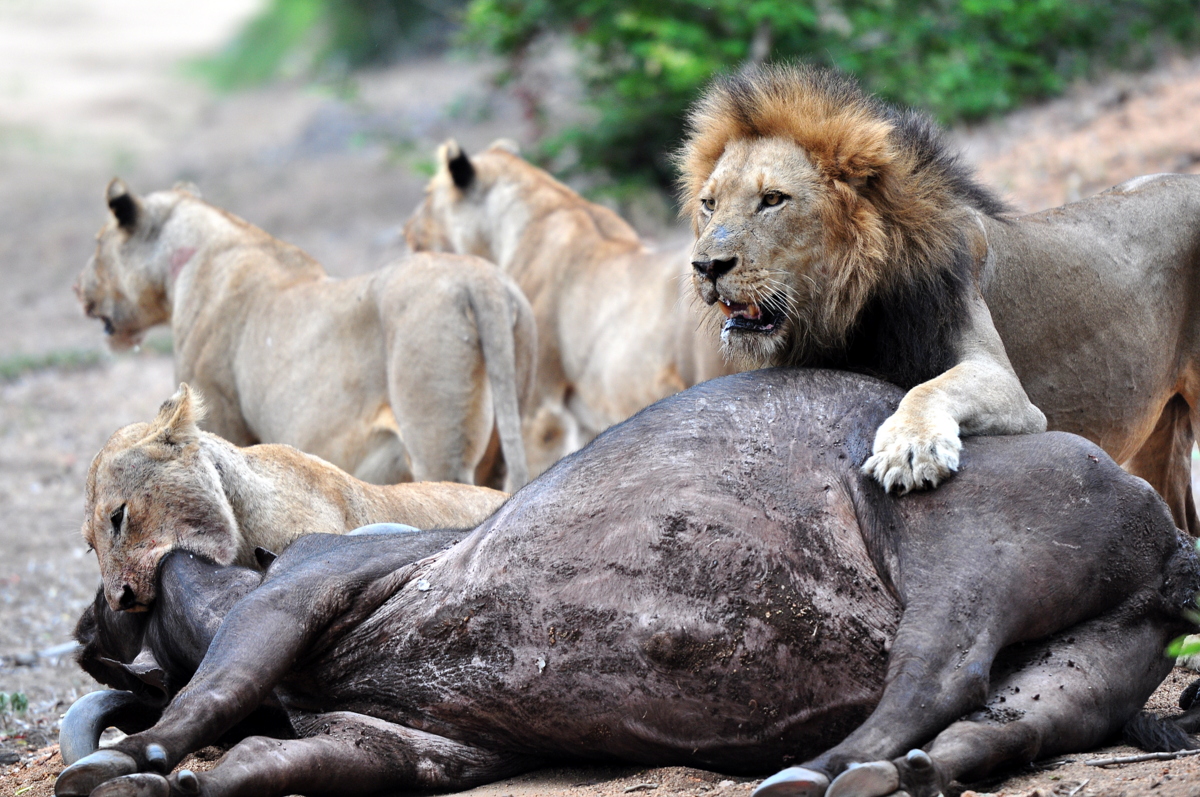 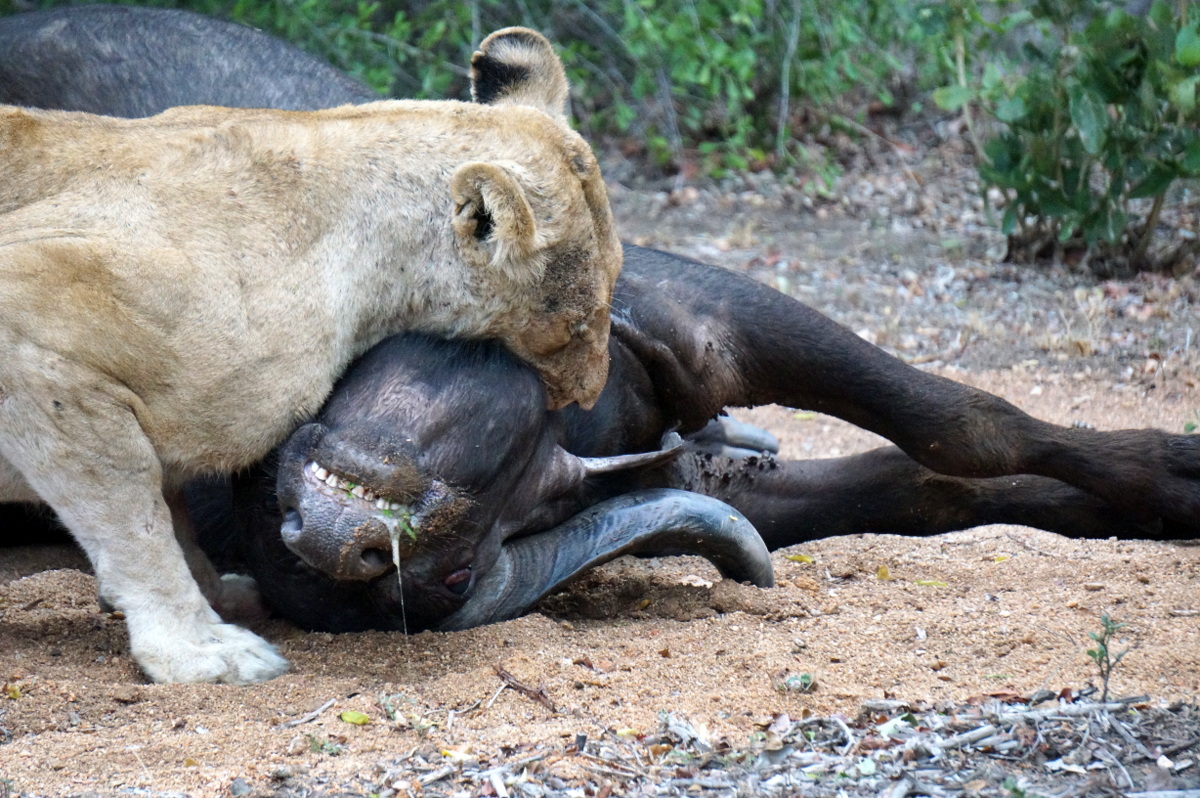 Once the kill is complete, the lioness returns a bit down river to escort the cubs to the pride’s new site. 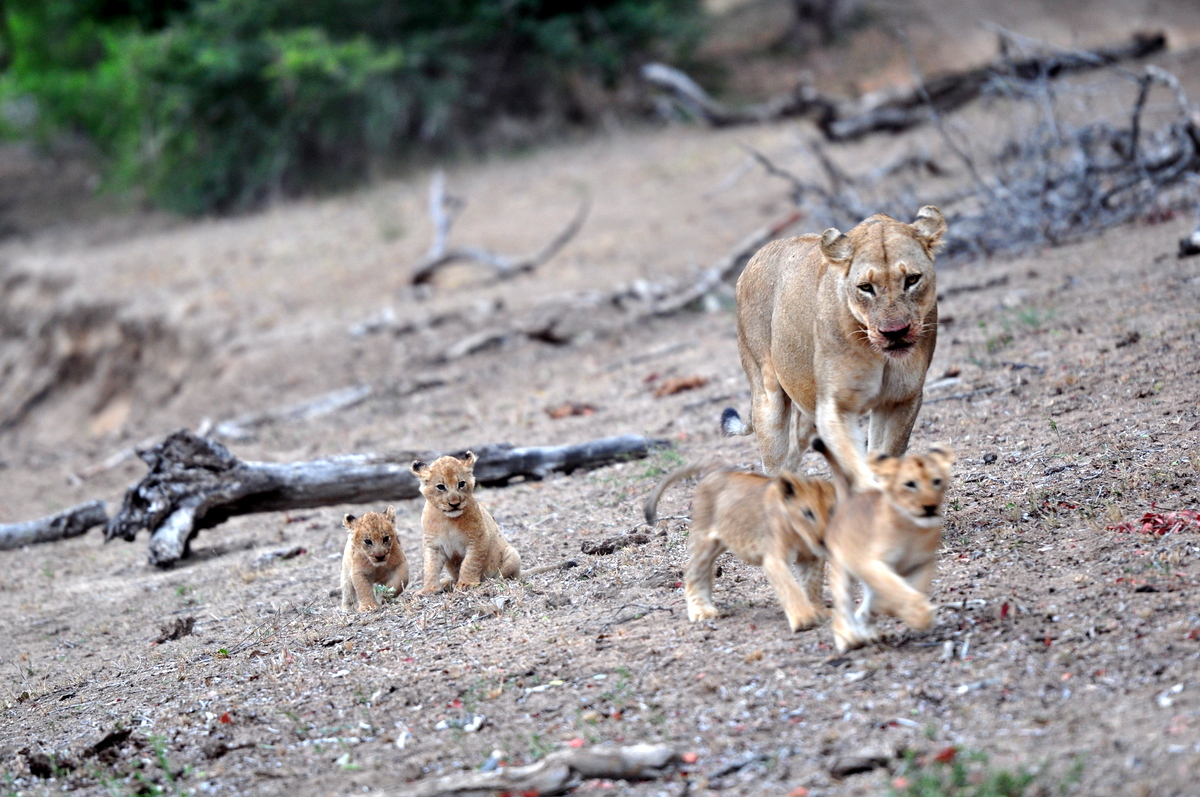 Since the pride of lions weren’t necessarily hungry, they relax, play and hang out around the buffalo, with the little cubs running and jumping on the buffalo’s now rigid body. 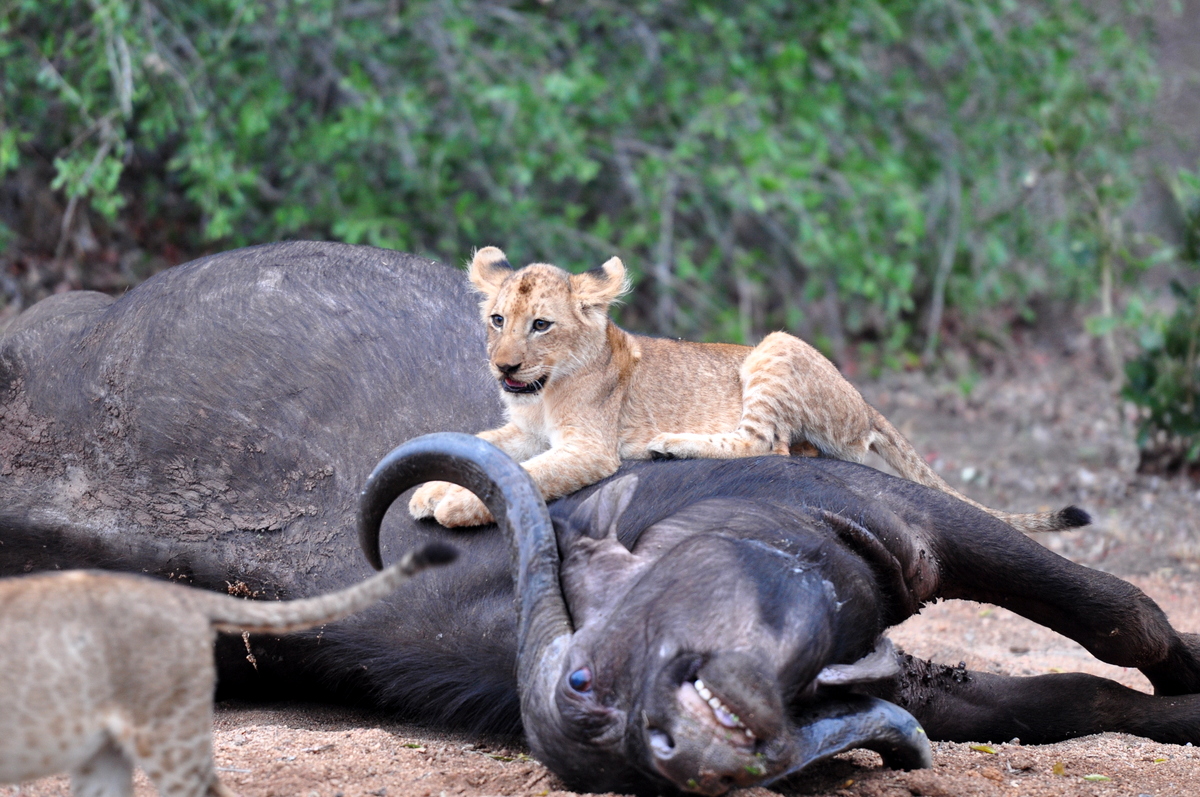 As weird as it is to say, it was an honor to bear witness to nature in action. I was worried how I would feel seeing an animal killed, but being caught up in the action, I found that you aren’t rooting for one or another like a sports match, rather you just silently witness what has been happening for centuries. It feels natural and normal. Of course you feel some sadness about the death of the buffalo, especially once we find out she was pregnant, but she had the opportunity to flee with her herd and she chose to stay back and fight. This is life in full view with no edits.

Even my 5 year old who will cry when a sad song comes on the radio said “It’s just nature Mama”. Indeed it is. Magnificent, awe inspiring nature. 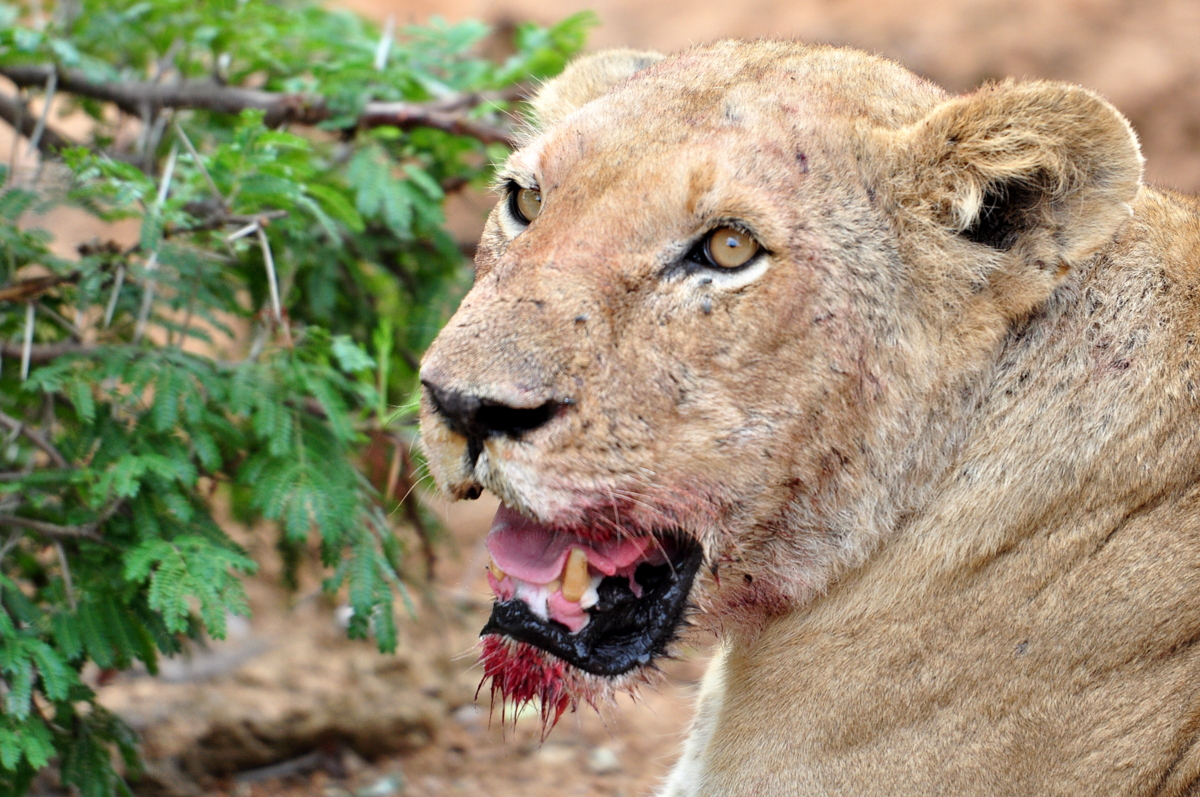 This was an exhilarating way to start our 4 day safari at Mala Mala Game Reserve. Each day on our game drives, we would return to the water hole to see how the feeding had progressed. 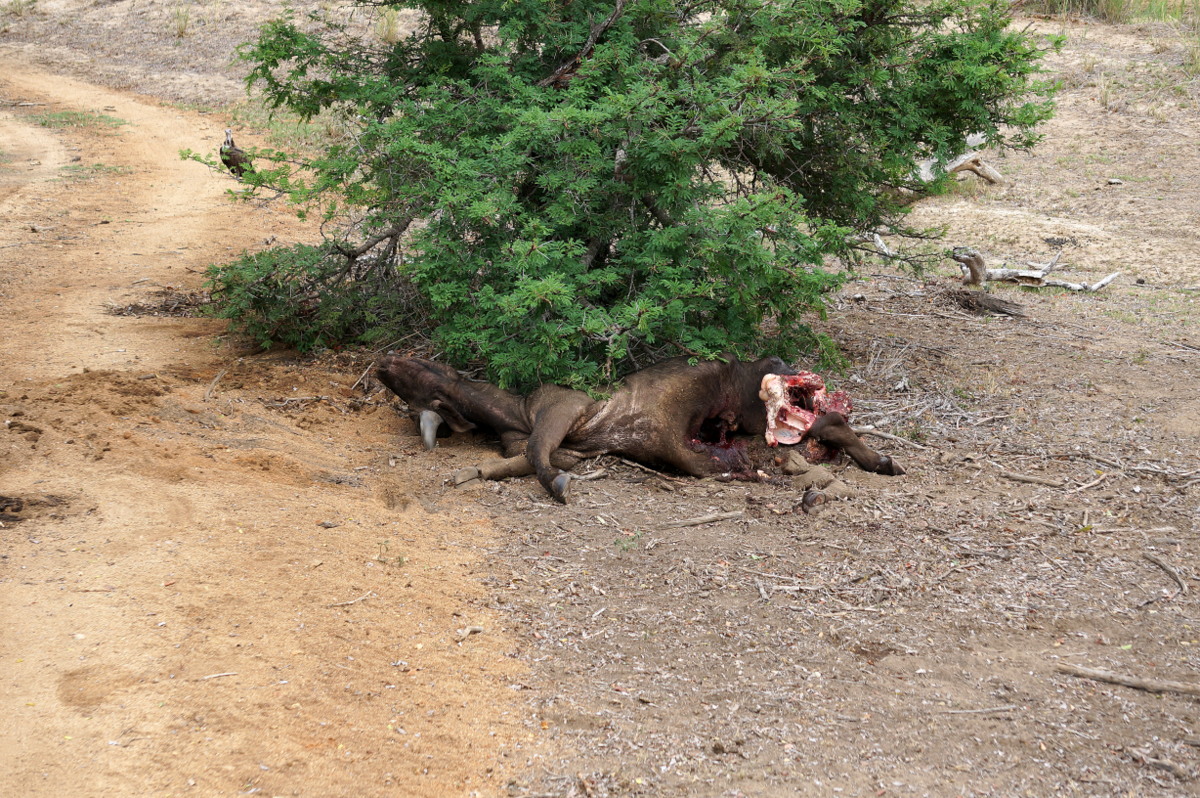 It took 4 days for the lions to finish off their kill before moving on, leaving the scraps to the vultures who had been hovering overhead since the first night. 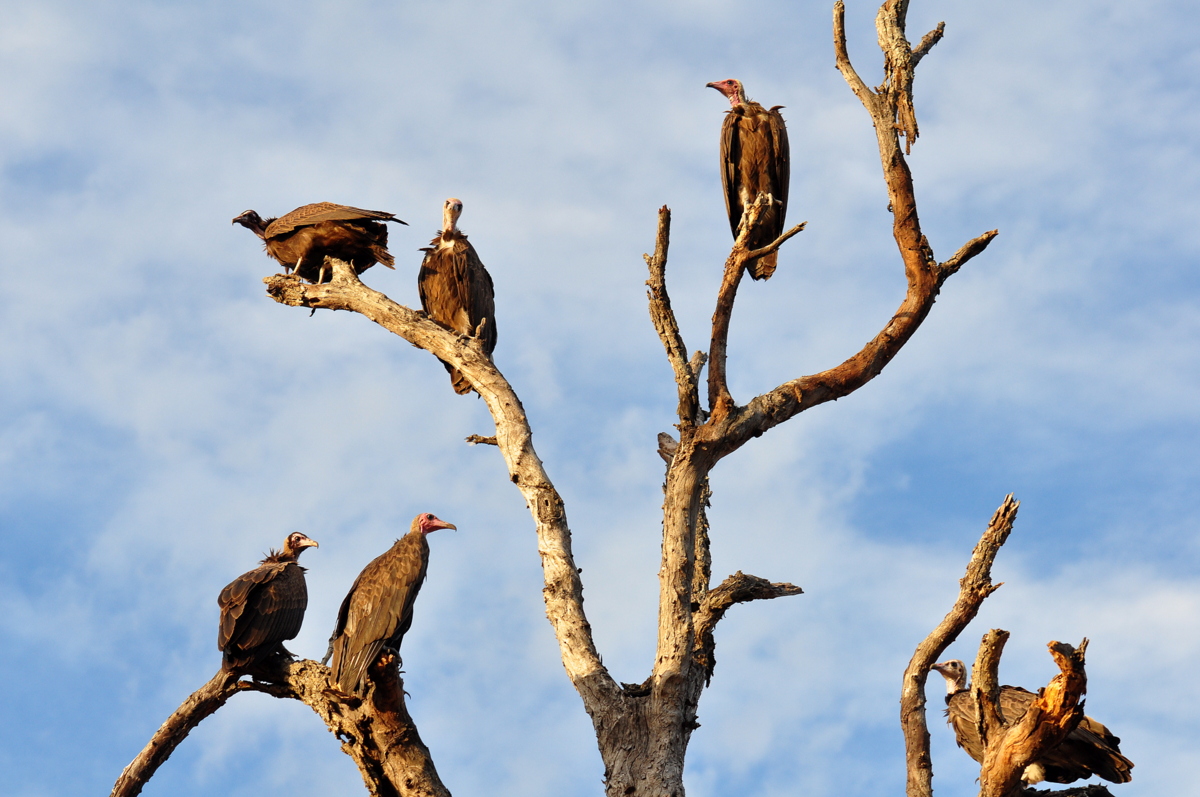 The lions were gone on our final drive-by. As we headed to the airport, we heard the pride moved down the riverbed for another buffalo kill later that day. And so the cycle continues.

In the months since our trip, we regularly look at the Mala Mala Instagram feed, catching up on the Eyrefield pride as well as the other animals we ‘met’ on our trip. I am definitely sucked in and cannot wait until life grants me the opportunity to visit again. For now, I will keep living vicariously through Instagram! Oh, and for the record, my wish to see zebra graze in the wild was also granted, although not quite as dramatically as my son’s!

Have you been on a safari in Africa? What was on top of your must see list? Are you safari obsessed now or does it fade with time? 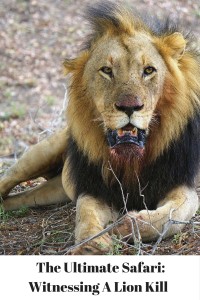 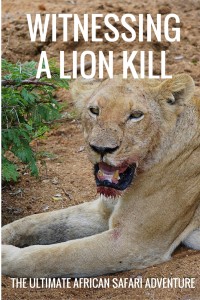 2 thoughts on “Witnessing a Lion Kill on Safari”