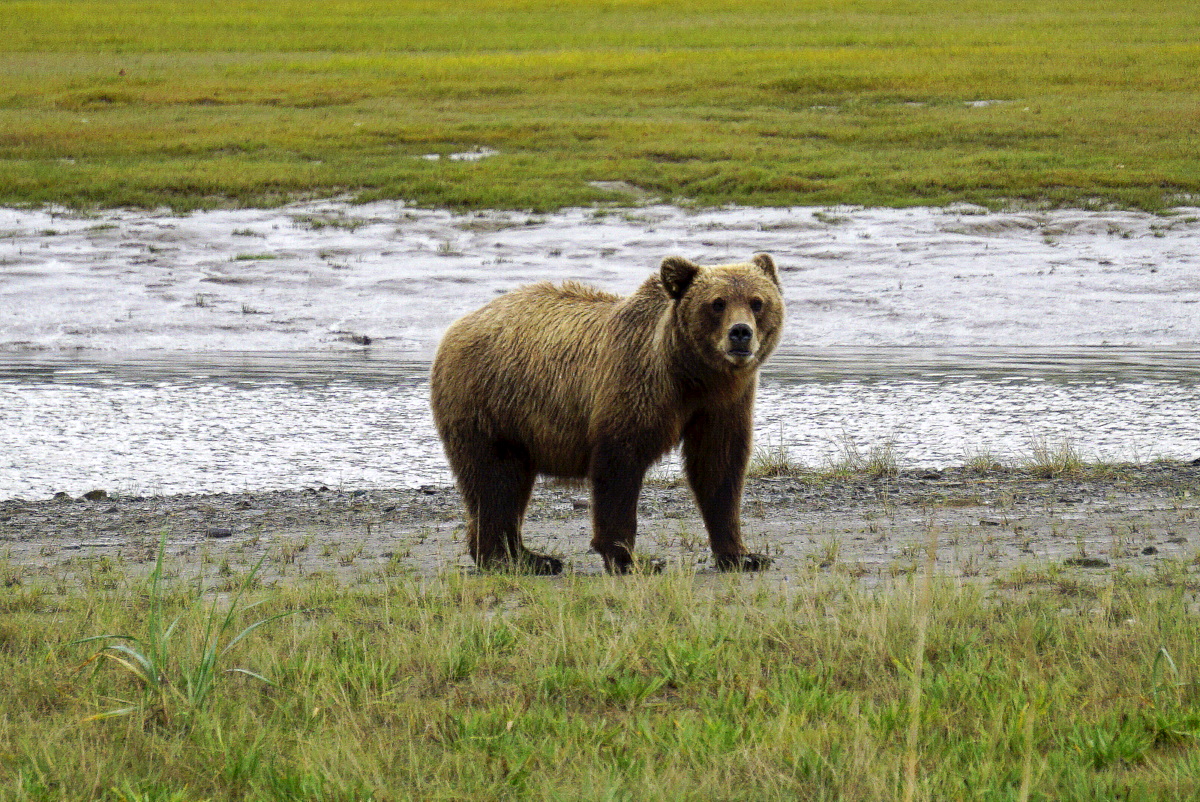 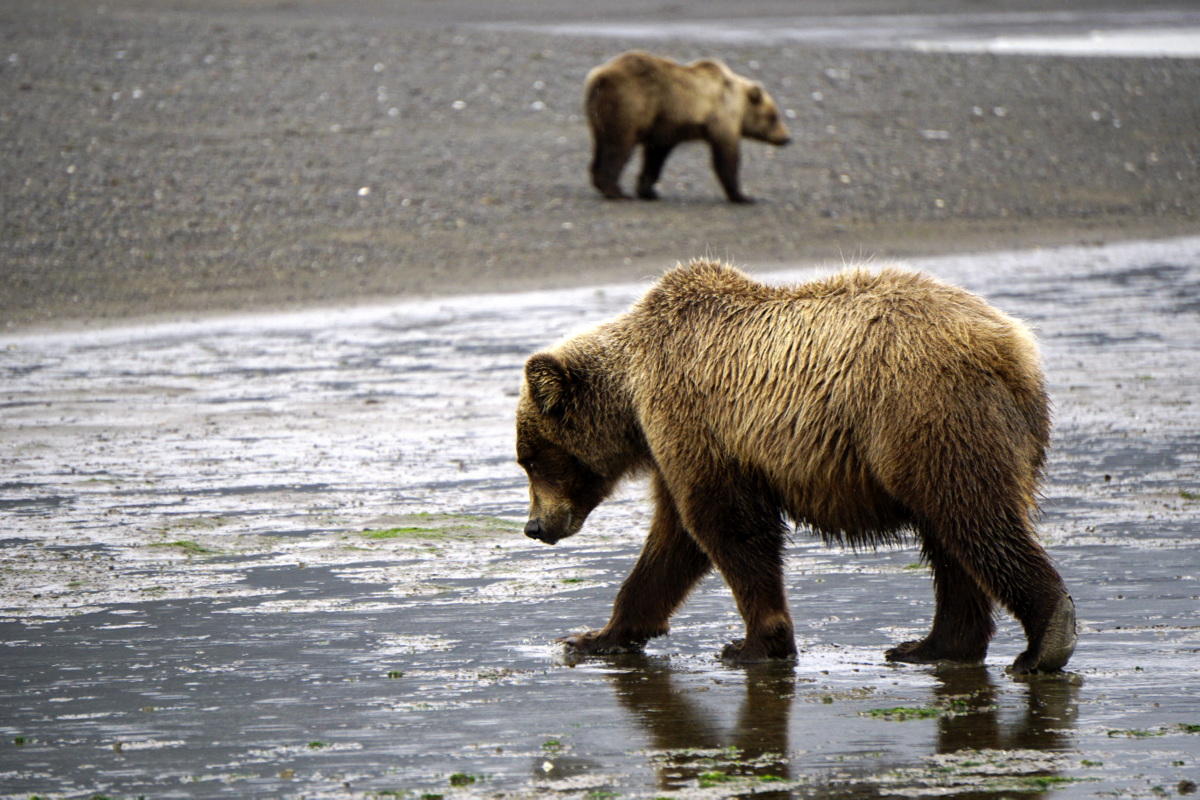 One of the biggest attractions for visitors to Alaska is to see wildlife in their natural habitat. This can be achieved almost everywhere in Alaska from seeing a bald eagle fly overhead in Anchorage to hiking with moose at Flattop Mountain. However, it is the bear that is perhaps the ultimate symbol of Alaskan wildlife. Seeing one of these strong, unbridled creatures on their home turf, for even a fleeting moment, is a magical experience.

During our visit to Alaska, we were lucky enough to see 5 grizzly bears in Denali National Park as well as the resident bears at the Alaska Wildlife Conservation Center in Portage, but it just wasn’t enough. It wasn’t the vision I had created in my mind after years of watching the live webcam feed of bears catching salmon at Brooks Falls or of bears clamming on mudflats in Lake Clark National Park. I couldn’t leave Alaska without trying to realize that dream. So, we decided to splurge for a “once in a lifetime experience” on a flight tour with the goal of seeing bears up close and personal, hunting, playing and sleeping. 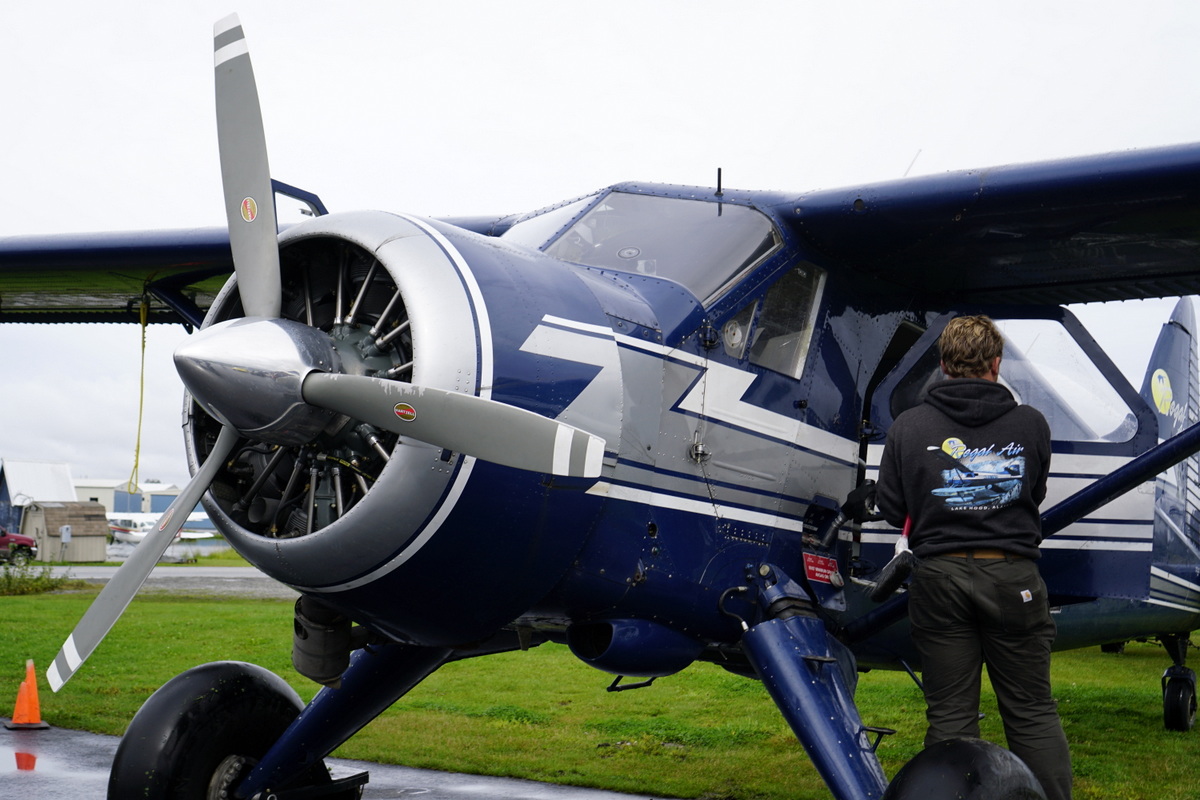 Our trip was scheduled for a Thursday, the day before we were set to leave Alaska. We got up early to drive to Lake Hood Seaplane Base excited for our adventure. Unfortunately the weather did not cooperate. After several hours of hopeful waiting in their comfy lounge, our flight was finally cancelled due to safety concerns. Regal Air, the company we had booked with, would try to accommodate us on another flight the following day. So off we headed back to our hotel crossing our fingers that our trip would not be cancelled as it was our last day in Alaska and our last opportunity to see these amazing animals on their own turf!

Luckily for us, the following day’s weather looked to be a bit better. Regal Air also planned a later departure time which gave the skies time to get it together. Whew.

Back at the lounge, we watched a 30 minute safety video, picked out our mud boots and rain pants and loaded into the small 6 seater plane with butterflies in our bellies! (OK maybe I was the only one with butterflies in my belly!) We have been on our share of small planes in our travels, but this was definitely the smallest plane we had ever been on. We even had to wear headphones to speak to one another.

The pilot reassured me that there would only be one section where things might get a bit “floppy” as I dubbed it. Holding my breathe and trying to keep my nerves at bay, I buckled up and put on a brave face for my 6 year old who was excitedly sitting next to me ready to take off.

Finally, in the Air 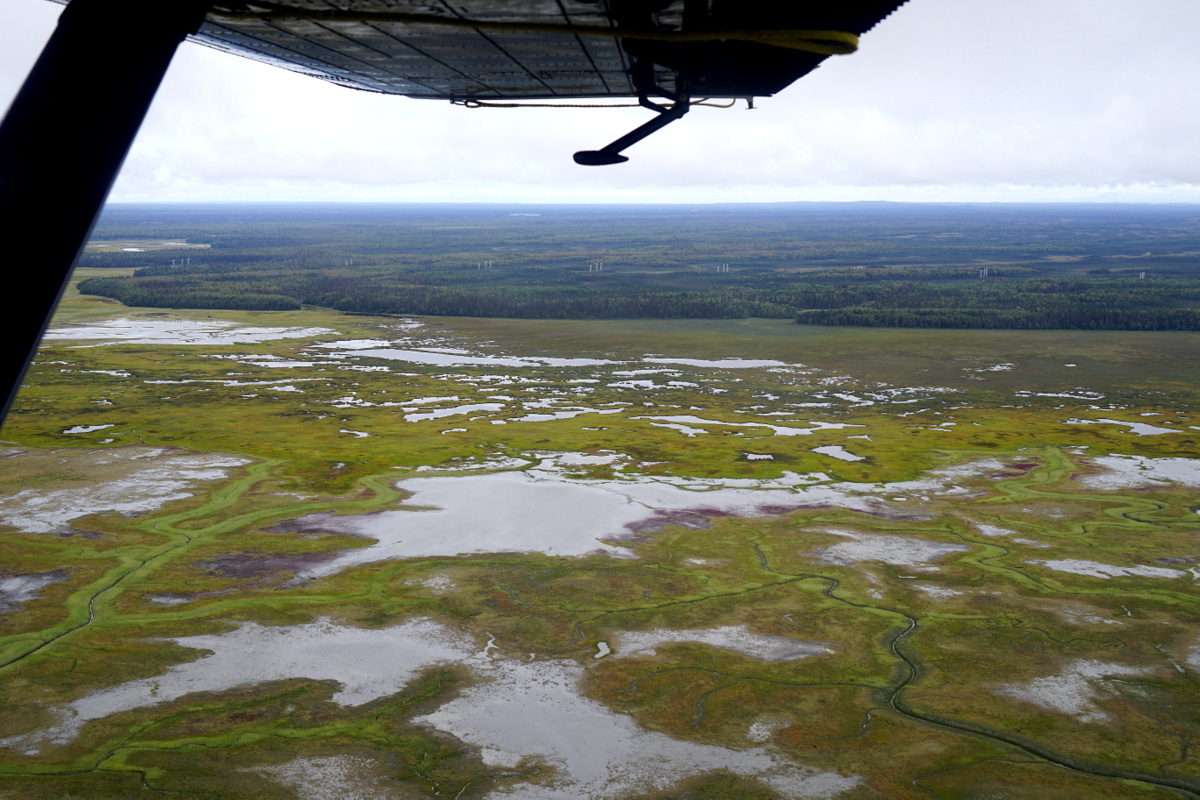 Whoosh and we were off. The scenery from up above was breathtaking. You don’t realize how little land there actually is on the coasts of Alaska until you look from above and see the millions of streams, rivers, tributaries and lakes criss-crossing the landscape. No wonder there are so many mosquitos here.

For 90 minutes, it was almost pure silence in my headset, if I ignore the jamming 70s classic rock playing on the radio, as my son wasn’t sure how to talk through the headset. I soaked it up along with the spectacular scenes playing out before me. It was a cloudy day for us, but our pilot told us that there were volcanoes and massive glaciers hidden from our view that you could normally see from above. Meanwhile, I continued searching for any sign of wildlife.

As we approached a aquamarine blue cove of ocean, I saw it – a bear playing on the mudflat! I excitedly tapped the window trying to share it with everyone. The pilot kept going, knowing that I was in for even more a treat ahead. But I couldn’t stop craning my head backwards to get another glimpse.

Our pilot soon began pointing out more spots on the mud to us as we began our descent. Honestly I don’t even remember landing I was so excited to see bears right outside the plane’s window. They were literally right next to the plane as we landed.

On Land with Bears

We quickly unloaded our bags of all food items that would need to stay in the plane. Thankfully I had prepared in advance by putting all of our food and items with a smell in a small bag within my backpack. Backpacks loaded, we put on our warm clothes and rain jackets before heading out in search of more bears.

With the rain slightly drizzling on us, we luckily didn’t have to go far. We were probably only about 20 feet from the plane when a bear began walking towards us. We all huddled together like our safety video told us to do and watched with cameras clicking as this beautiful brown bear walked right in front of us. He wasn’t interested in us in the least. I was worried that the constant noise from my camera would irritate him or that I would be told off by our guide, but no one seemed to notice except me. We stood with our mouths hanging open as this graceful creature with much larger claws that I expected sauntered in front of us on his way to wherever he was going next.

As he passed us, the 6 of us all gasped and began chattering with excitement. What a cool experience and this was just the beginning.

We pottered a little further down the beach to where a collection of bears were sleeping and relaxing on the mud. At one point we could see more than 20 bears in our field of view. Some were quite a ways out in a mud flat across the bay, but we could distinctly see that there were some mama bears with cubs there.

But we were happy to make this our home base with about 16 bears on either side of us. As we stood in one place for what seemed like 10 minutes but was closer to an hour, we snapped photos, looked through the binoculars to get a closer view and stood in silence taking it all in.

All I could think was “We are standing in Alaska, on Chinitna Bay Beach in Lake Clark National Park with wild brown bears”. This experience was second only to our amazing safari experience in Africa for my 40th birthday.

As time passed, more and more of the bears were being woken from their slumber by the rising tide waters. Some would saunter a bit closer to us, dig a hole and lay down again for a sleep. Some would playfully bat at the mud checking for a quick snack. 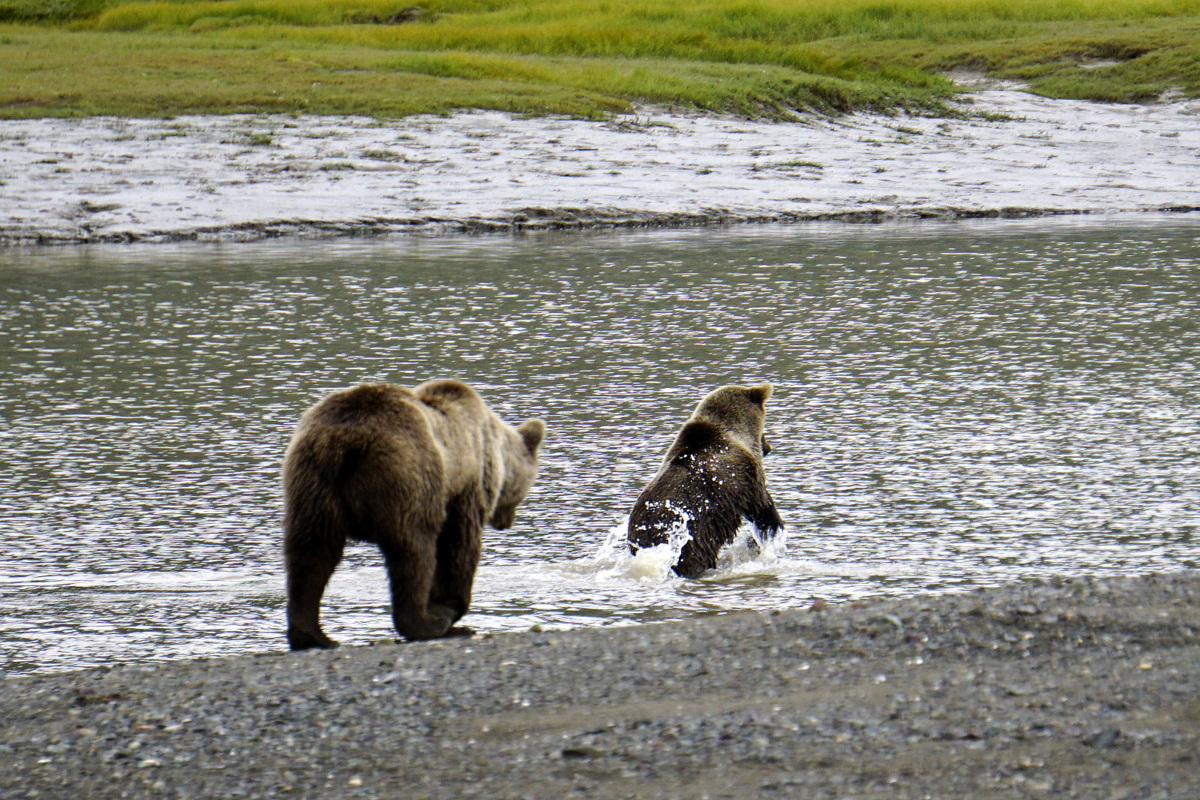 Two of our favorite bears came walking close in front of us making their way inland to the river. We followed them for a bit and were presented with the cutest scenes of them trying to catch salmon in the river. Our guide estimated these bears were probably siblings that had recently been kicked out by the mama bear as evidenced by their poor fishing skills! Sad for the bear to not catch anything, but it was a joy watching him splash around.

And in a flash, our 3.5 hours on the ground was coming to a close. We could have stayed forever except the tide was coming in quick, taking away our beach runway. 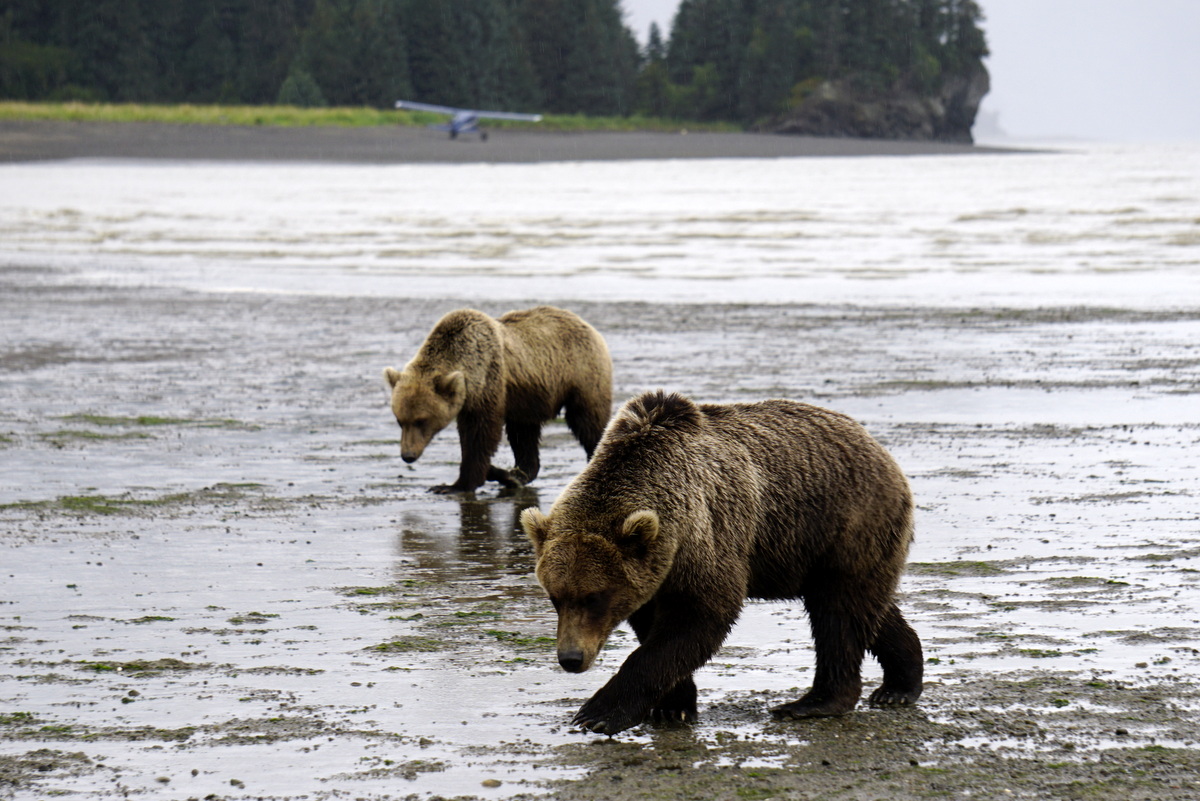 With cameras full of photos and heavy hearts, we had to say our last goodbyes to our amazing wild bear friends before hopping back into the plane for a late lunch and flight back to Anchorage.

Within minutes all the boys (the pilot thankfully excluded) were asleep, while the two women (and nervous fliers) were wide awake soaking up every last second of Alaska that was laid bare below us. Glaciers, forests, mud flats and millions of waterways. Not totally what I had expected of Alaska, but so much more. 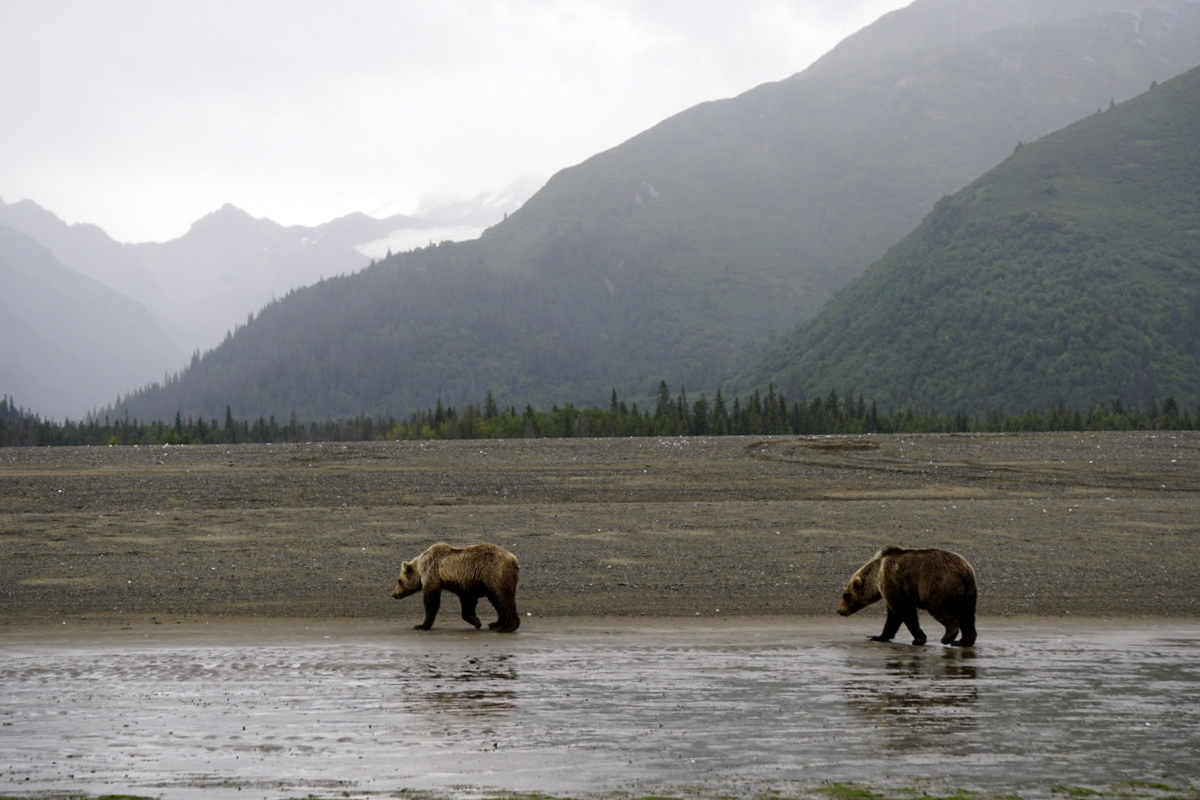 Yes, our trip to hang with the bears was essentially $100 an hour, but that felt like the best money we spent on the trip. If I could do it again today I would without question. I would even give up seeing other stuff in Alaska for another day in the wild with bears.

Next time I will try to go in July so I can go to Brooks Camps. It will be a totally different experience since it’s much more touristy, has accommodation and even viewing platforms, but touristy or not, it’s the vision of bears in the wild that I’ve always dreamed of seeing. 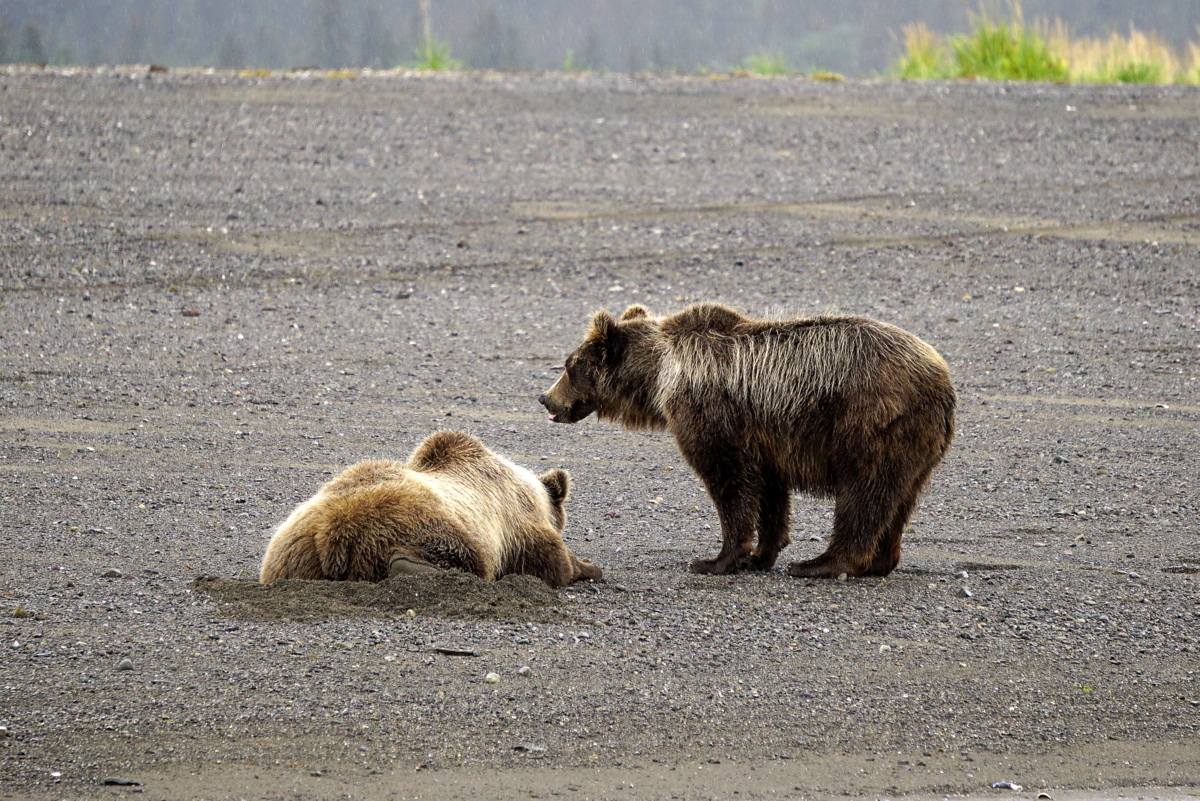 Bear viewing flights in Alaska can take many forms and there are a variety of operators ready to assist you. For our trip, we went with Regal Air which were fantastic. They were great at rebooking us within their already packed schedule as they knew that it was our last day.

Our trip was 6.5 hours to Lake Clark National Park and cost $785 per person. This includes your flight, loaner boots and rain gear if needed, a small packed lunch and a guide to take you straight to the bears while on land. It is definitely an extravagant luxury excursion, but one that is worth every penny!

The other main operator out of Anchorage that we heard wonderful things about was Rusts Flying. Be diligent in your research to find a company who has a great safety record, has backup plans in case of any problems (like bad weather) and who know where to go to get you the amazing experience you hope to have with the bears of Alaska.

Is seeing wildlife in their natural habitat a dream for you? What animal is at the top of your wish list? 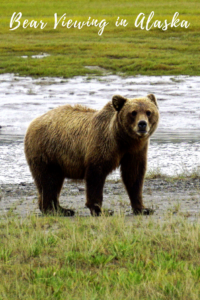