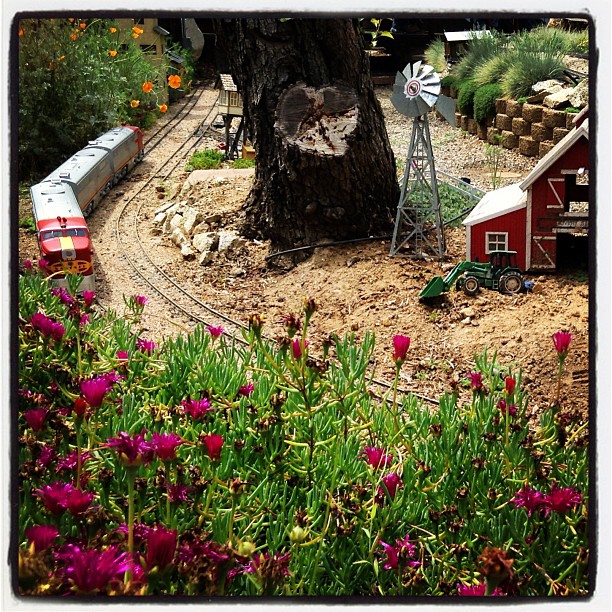 It is not easy to get in to see the LA Live Steamers model train and train ride in Griffith Park. They are only open on Sunday’s from 10:45 a.m. – 3 p.m. and with a toddler who still naps this doesn’t give you much time at all. This Sunday we didn’t have much to do before attending a birthday party at noon, so we decided to give it a go. We arrived at a little after 10:30 a.m. to people waiting at the gate, excited to get in. The 8 yr old boy who had already been waiting for a while was eager to go in and no happy at all, but was happy to have some other kids to talk to. Apparently it didn’t matter where you waited because according to the one of the regulars, the train ride doesn’t ever go until 11 anyway. But still not easy for kids to be standing outside for 20-30 minutes seeing what looks like fun inside, but locked outside! 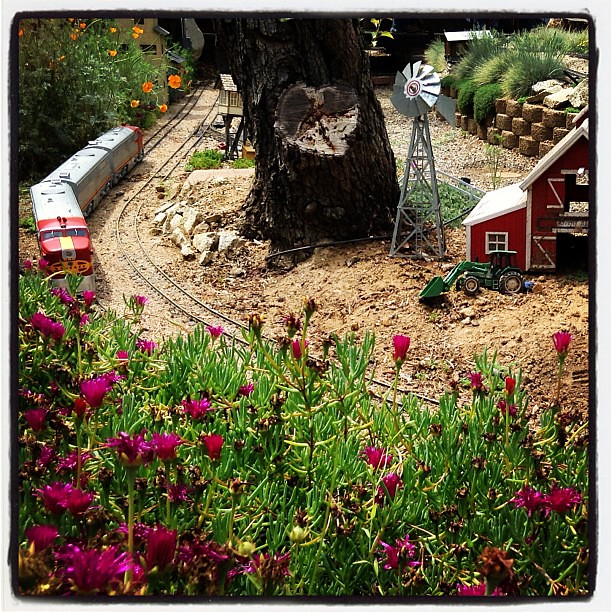 The place seems to be run by train enthusiast volunteers who aren’t there to make the visitors happy necessarily, they are there to do what makes them the happiest – fiddling with trains! We could see a dozen workers milling about with not the slightest quickness of step. They were busy testing out their trains, working on tracks, catching up with one another.  Finally at 10 minutes to 11 the gate was opened and the crowd of us flowed in to buy our tickets for the train ride.

It’s not a cheap train ride, but after visiting all of the ride on trains in the LA area, I can say it is the best. The suggested donation of 3 dollars per ticket adds up quick, but it is worth it.  Also worth noting, children must be 34 inches or taller to ride and they are very strict about this.

The train is not what you are used to. It is basically a long platform with a padded seat that you straddle. It feels a little flimsy at first, but you get used to it and don’t even notice after a few seconds of having the wind fly through your hair. In some ways you feel like a giant visiting a tiny city and in other places on the ride you feel miniture in comparison to the large rail cars.

The route we took today (there seem to be several options, so I imagine it is not always exactly the same, but perhaps it is) started off with us going through a little tunnel and through the hills seeing a couple of hillbilly shanties along the way. Then over a bridge looking down on a nice green pasture below. Around through the wilderness and then back through the hillbilly shanty town and off to the nicer part of town with a lovely model water wheel home and  little town. 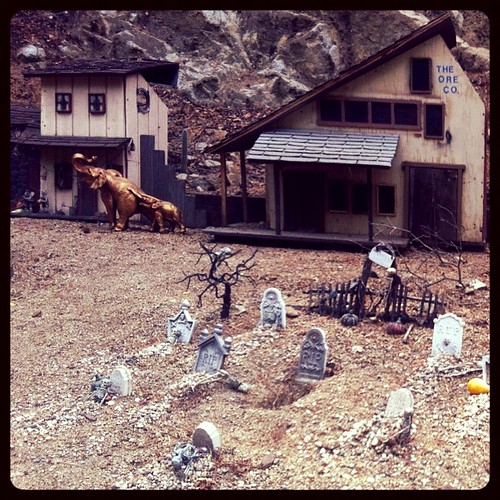 The next part was especially exciting to our toddler, the railroad crossing bells were tolling letting every one know that our train was coming through! As you pass over another little bridge you see several smaller bridges below and criss-crossing of tracks.  You get back to where you started, feeling like you had a pretty good run for your money, but wait it’s not finished, you get to loop around again on one of the inner tracks!This give you just a bit more time to see some of the things you might have missed before.

I remember seeing long lines and lots of traffic outside of here during the Halloween season. I heard they had a great haunted ride. You can see some of the masks and discarded decorations hidden behind some of the structures. It is on our Halloween to do list, along with trick or treating at Disneyland.

As you leave you can also spend some time checking out the model train going around its tracks. The volunteers were lovingly fixing tracks and tinkering with things on our visit.

If you have (or are) a train enthusiast little one, this train park should be on the top of your list of to-do’s. The kids will love the train ride and checking out the model train going through the ‘town’.