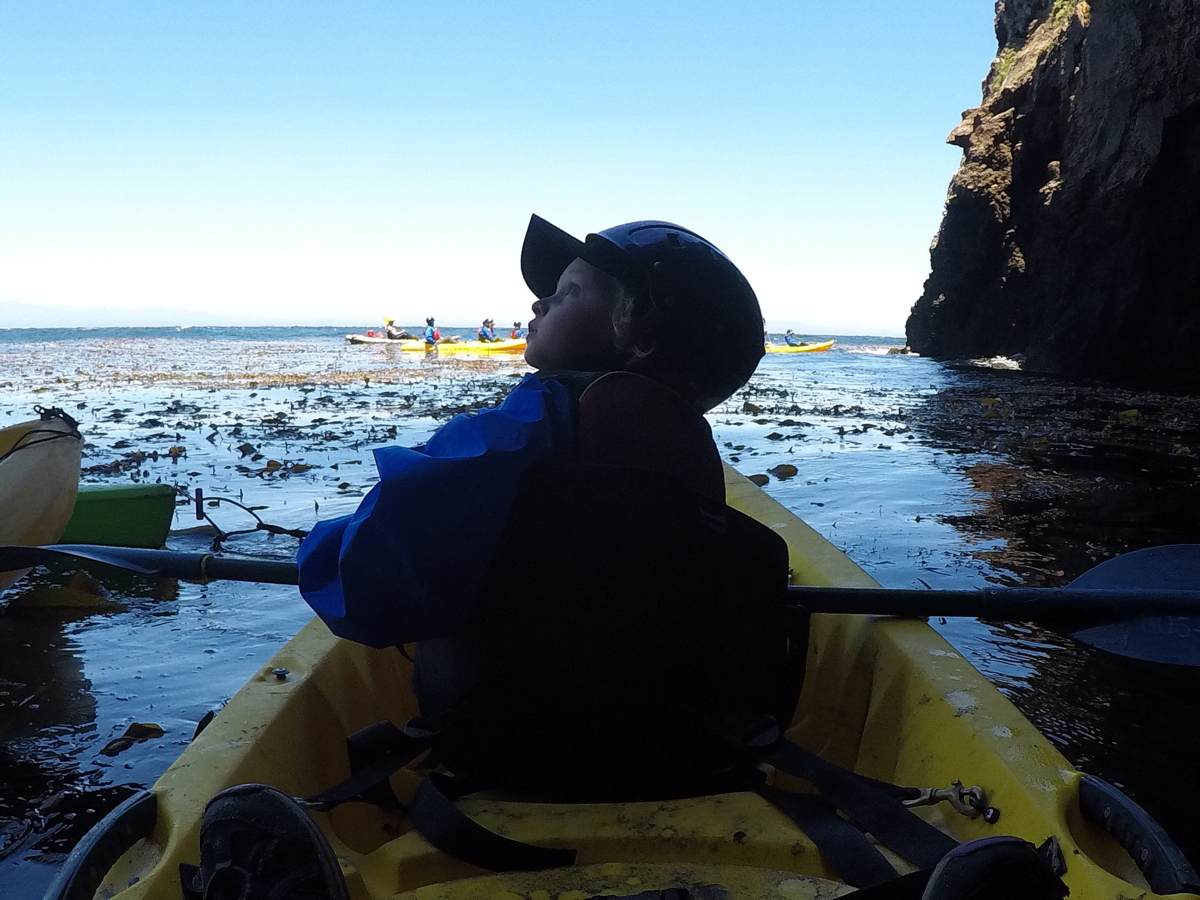 Last summer I was offered an opportunity to visit one of the few national parks in California I had yet to visit, the Channel Islands. Upon looking at the itinerary I noticed that an entire day was dedicated to kayaking around the island of Santa Cruz..in the sea! I was terrified to be honest. I had never kayaked, much less in the sea.

The water in California is not warm even in the height of summer and I was super nervous about the possibility of flipping my kayak. Now, add in that I would be doing this with my equally scaredy-cat 6 year old who prefers hot tubbing to actually swimming! And there you have it, the scene is set for our adventure at the Channel Islands kayaking with kids. 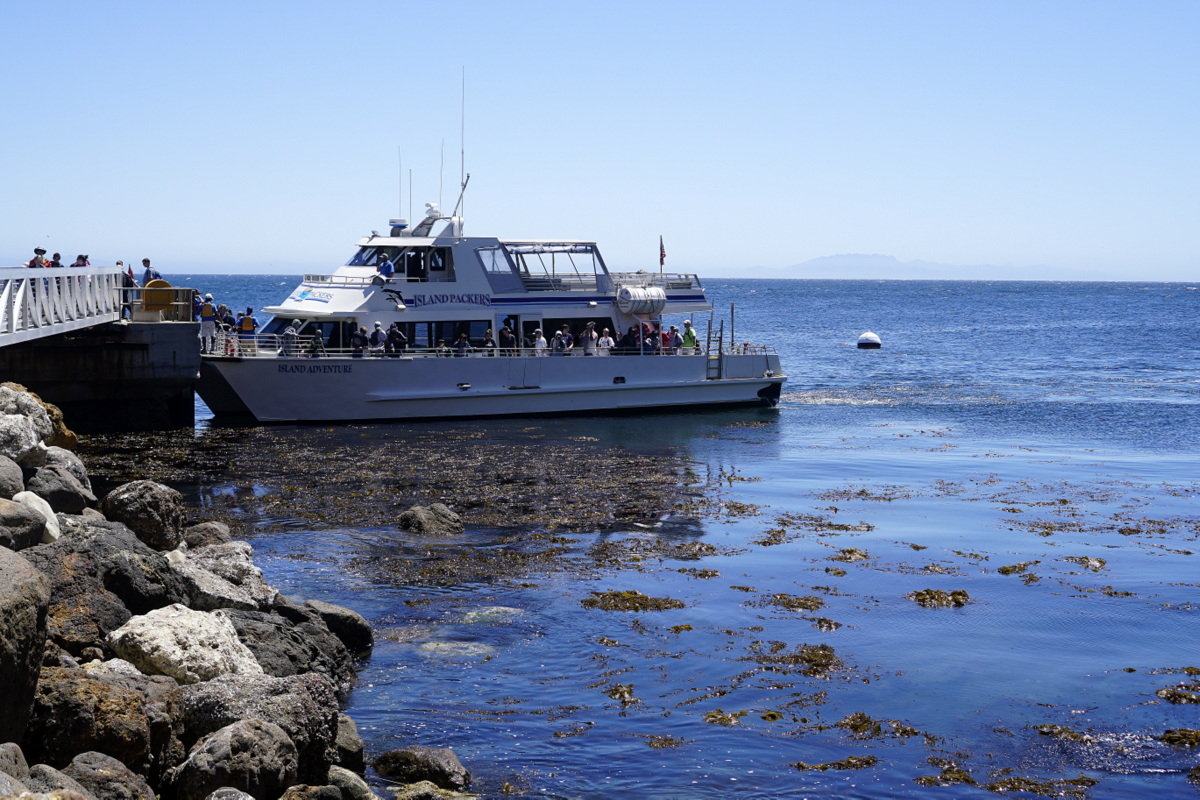 Before our adventure could even begin we grabbed our breakfast to go and hopped on board the Island Packers boat for our hour long ride to Santa Cruz, one of several Channel Islands off the coast of California. The morning was a bit chilly with choppy seas welcoming us.

The kids on the boat had a blast standing on the front deck holding on for dear life as they were splashed like they were on a Disneyland roller coaster. I sat inside, attempting to thwart the little bouts of nausea creeping in.

As we arrived to the island, my nerves began to set in. One of our fellow passengers decided she wasn’t cut out for the kayaking adventure. That didn’t give me a whole lot of confidence to do it myself, but as always when I have my son who is looking at my lead I knew I had to power through the fear and go for it. 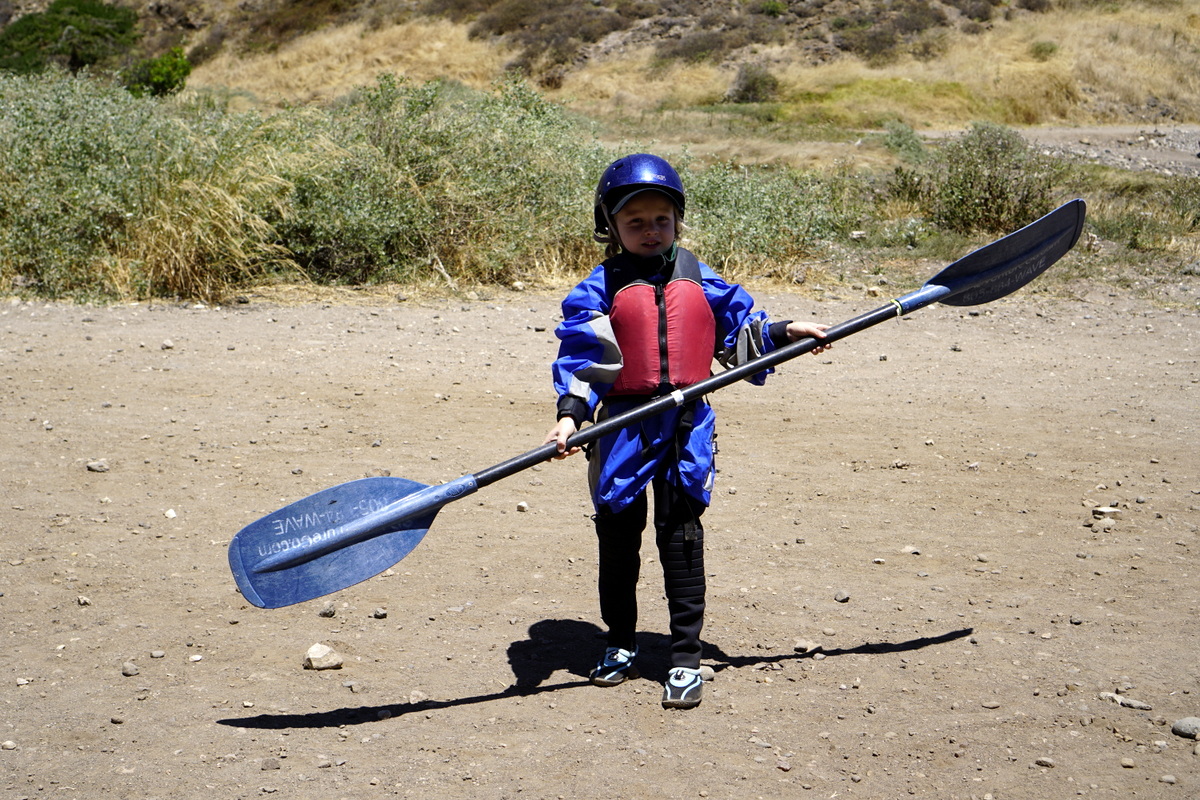 My normally nervous-nelly 6 year old was dancing around in his wetsuit, rain jacket and water shoes excited as could be. I was in a calm panic trying to put my wetsuit on properly while also attempting to pay attention to the tour leader on what the day’s plan would be.

Before going into the water, the guide gave us a few instructions and also showed us how to paddle. You don’t need weeks long training for this excursion, but I would recommend listening closely to the instructions, which I did not do!

A few single kayaks were already out in the water as I slowly dragged our double kayak down the rocky beach. I began to feel very nervous that I had no idea what I was doing, but I just keep on moving.

A fellow member of the group helped us load into our boat and we were off.

The waves were already stronger than I was and I had no control over our kayak. The waves kept moving us our even as I frantically paddled this way and that. We were soon out much further than we needed to be and we hadn’t even started the tour.

Only in the water for a few minutes our tour leader heard our screams of “Help!” and paddled his way out to us.

Well this wasn’t going so well. I was a nervous wreck. My arms were already tired and my son had lost all confidence in me. The guide said that if we needed help he could tow our boat, but we would still have to paddle.

My son jumped at the chance. “Yes, please tow us!” he begged the instructor, terrified to be left on the open sea with only his mother.

And there we were, only minutes into our first kayaking experience being towed. I felt like a total failure.

After the initial panic and total embarrassment of being towed subsided, I started to get the hang of it a bit more. Still totally petrified that we were going to flip in the choppy seas, I continually looked around for rocks that I could use to pull my son to safety if needed! Panicked and paranoid much?

In reality, most of the tour was actually very slow paddling or sitting in one place learning about the wildlife in the area, the mountains and the sea. I was so impressed by all the knowledge that our guide had about area. It was really fascinating. If only I could calm myself down enough to enjoy it more.

As we rocked with the waves inside a large cave, listening to our guide tell us about sea kelp and it’s uses, I finally began to loosen my death grip on my paddles and enjoy the movement. Meanwhile my son must have also relaxed as he was pulling up small bits of baby sea kelp and sampling it as the guide suggested.

Finally relaxed, it was time to continue our quest to circle the island. However, being much later in the day than normal tours, the seas started to get quite rough. Even our fellow tour members were exhausted padding against the current and weren’t interested to keep going around the island.

I was getting more nervous as the waves began beating against the rocky cliffs and the afternoon winds crept up. Even though I was so relieved to be heading back to shore, it was also a bit sad that our adventure was ending.

Here I was surrounded by nature, actually submersed in it, but not taking the time to fully absorb all its peaceful energy. Instead I was stuck within my own head full of fear.

I won’t lie, the experience left me deflated, but determined to get back into a kayak to try again. I felt like a failure for being pulled around by the tour leader, but I at the same time, I also recognized my own weakness and paddling against the strong current was definitely one of them. I am so thankful the guide offered to tow us and did tow us! We couldn’t have done it without him.

Fast forward almost a year later where we found ourselves with another opportunity to kayak. This time, however, it was my 7 year old who was super nervous and panicky. Our second kayaking experience was set for a placid lake at Whiskeytown National Recreation Area.  It felt like the perfect opportunity to get back out there for a redo. And guess what? We rocked it. Now the child is OBSESSED!  And trusts his mother again.

I am so thankful for Visit Ventura County Coast for putting this on my itinerary and opening up a new world to both me and my son as well as giving us something exciting to try on our travels. 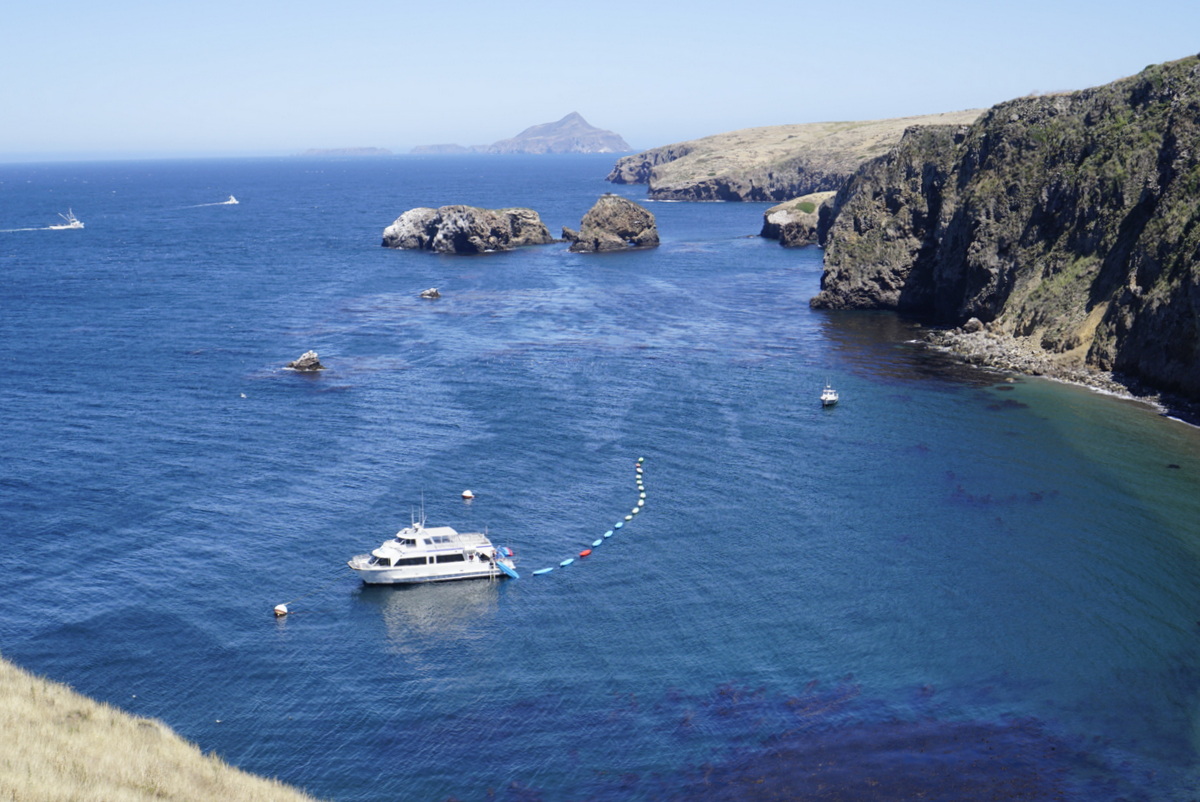 Even though I was a total nervous nelly during our experience, I have to give big props to SB Adventure Company, the only company authorized to provide the Channel Islands kayak tours at Scorpion Ranch on Santa Cruz island. They offer various tours ranging from half day adventure tours to short discovery cave tours as well as tours focused on bird watching. Their guides are amazingly patient with scaredy cat kayakers like me as well as super informed about the island, making them a winner in my book. I would not hesitate to go out with them again now that I have a little less fear going on.

Prices begin around $100 and do not include your ferry ride over to the island. However, it does include all of your equipment including wet suits, rain jackets and of course the kayaks. They can also provide snorkel masks if you want to spend some time on the island snorkeling.

If you are an experienced kayaker and have your own inflatable kayak, you can easily bring your boats (inflatable or regular kayak) over to the islands on the boat over.

If you are heading over, I would highly recommend grabbing a lunch box from Channel Island Provisioners. They can bring you a hot breakfast before you board the boat as well if you really want to go all out. The food was absolutely delicious and really was one less thing to worry about for the day.

If you plan on a short kayak experience, but have all day on the island, you can also explore Santa Cruz by snorkeling or by hiking. For more information, read our guide to exploring the Channel Islands.

What do you think about sea kayaking? Is it hard for a beginner or am I just a total scaredy cat? Don’t answer that.. I already know the answer 🙂 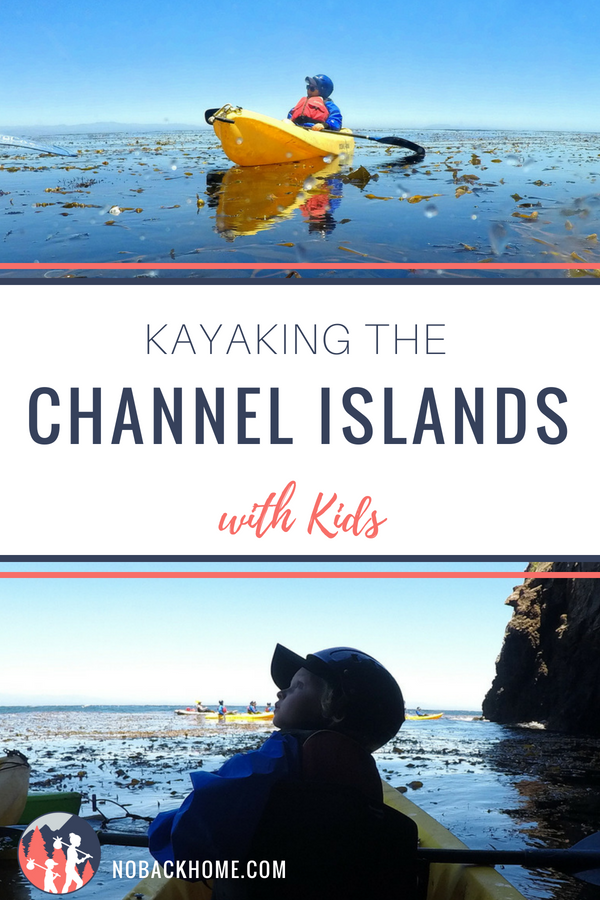 This trip was hosted by Visit Ventura County Coast. However all opinions and thoughts expressed here are my own with no influence by the host.

6 thoughts on “A Family Adventure: Channel Islands Kayaking with Kids”